“It’s over for you; give up”. That was the doubting voice that continued to whisper into the ears of Floyd Emerson Morris after losing his sight in high school due to glaucoma. In an interview with the Jamaican Observer recently, the 48-year-old blind Jamaican politician said at the age of 20, he had to overcome anger, depression, people who did not know how to deal with blindness and postponed ambitions following his predicament.

He even had to leave high school after not being able to pass his subjects due to his situation. Morris is now the first blind member of the Senate and its president, with many describing him as a legend in the community of disabled persons. But how did he find the courage to go on to achieve all that?

Floyd Morris was born on July 23, 1969, in Bailey’s Vale, near Port Maria, Saint Mary Parish, Jamaica. Lloyd Morris, his father, was a fireman, and his mother, Jemita Pryce, was a dressmaker. Morris has four brothers and three sisters.

When he lost his sight in high school due to glaucoma, efforts made to treat it with medication and laser treatments did not yield any result. Six years after those attempts, he became completely blind. Morris was therefore not able to complete schoolwork. He left St. Mary High School in the eastern parish after grade 11 without a single subject as his sight had gotten worse to the extent that he could not complete his Caribbean Examination Council (CXC) exams.

He subsequently became a poultry farmer, with his mother later giving him some money to expand his farm from 30 chickens to 200. The farm eventually expanded to 27 acres, including vegetables.

Morris, later in 1991, travelled to Kingston to get some assistance from the Jamaica Society for the Blind on how to cope with his disability. There, he learned how to use the braille and subsequently completed his high school studies to enable him to go to college. He applied to Campion College but was rejected. 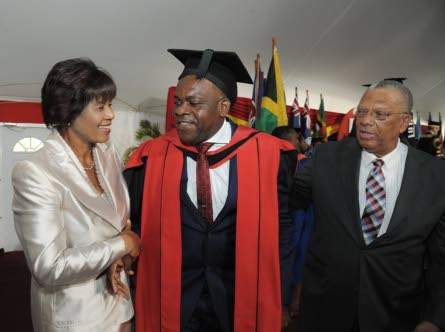 He later enrolled at Mico Teacher’s College, now Mico University and went on to the University of West Indies (UWI) to read for the first degree in mass communication where he would later return to get a Master of Philosophy in Government degree and a Doctorate in the same field.

At the UWI, Morris became a student leader. In his last year of undergraduate studies at the university, Prime Minister P. J. Patterson visited the university to give a speech. During the question and answer session, Morris criticized the Prime Minister’s education policies. That was the beginning of his interest in politics. He later joined the People’s National Party Youth Organisation and through that, Morris travelled to the 1997 World Youth Congress in Cuba, where he attracted many as a skilled public speaker.

He started giving speeches in support of the People’s National Party (PNP), a social-democratic political party in Jamaica as part of the 1997 general election when he returned from Cuba. The PNP won the election, and Horace Clarke and other PNP members lobbied the Prime Minister to name Morris as a senator.

In 1998, Morris was first appointed to the Jamaican Senate by Prime Minister P. J. Patterson, making him the first blind member. He served in the Senate until 2007. From 2001 to 2007, he served as the Minister of State in the Ministry of Labour and Social Security, under Ministers Danny Buchanan and Horace Dalley. Morris lost his seat when the PNP lost the 2007 general election but he regained it in 2012 after the party regained a majority of its seats in the 2011 general election.

Morris was appointed the president of the Senate on May 17, 2013, after being nominated for the position by the Senate’s Leader of Government Business. He replaced Reverend Stanley Redwood, who resigned from the Jamaican Senate to move to Canada.

Morris is married to Shelly-Ann Gayle. They got married in July 2011 at the University of the West Indies (Mona) Chapel. The blind politician, who is a Seventh-day Adventist is the host of a radio programme “Seeing From A Different Perspective”, which deals with issues about disability and the society.

Few days after receiving his Doctor of Philosophy (PhD) degree from The University of the West Indies in 2017, Morris launched his autobiography and titled the book “By Faith, Not By Sight – The Autobiography of Jamaica’s First Blind Senator.”