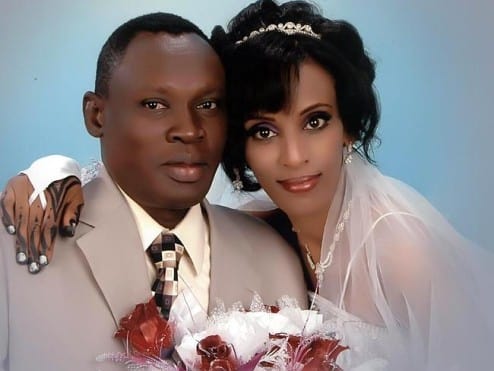 Meriam Yehya Ibrahim Ishag (pictured), a Sudanese woman who was jailed for marrying a Christian man in the mostly Muslim nation, has given birth to a baby girl in prison. Ibrahim was sentenced to hang for apostasy early last month, garnering international attention from human rights activists and the world.

Sudan practices Sharia law, and under that rule a Muslim woman cannot marry a Christian. Ibrahim’s father was a Muslim, but he reportedly did not raise her. There are conflicting reports that Ibrahim is still a practicing Muslim, even though it was reported that she would not renounce Christianity. Pregnant during her testimony, Ibrahim was jailed along with her 20-month old son. Ibrahim’s husband, Daniel Wani, is wheelchair-bound and has not been able to gain traction in the case.

Ibrahim is still due to face 100 lashes for her infraction, which will be carried out as soon as she’s able to stand. Under the law, she will be allowed to nurse her child for two years before being put to death. Along with apostasy, Ibrahim was also charged with adultery based on her decision to marry outside the dominant faith.

According to reports, death sentences in Sudan are rarely carried out. And as CNN reported on May 21, Sudanese Parliament Speaker Fatih Izz Al-Deen claims that Ibrahim’s death sentence is not final. Groups, such as Amnesty International, have been calling for Sudan to respect Ibrahim’s choices.