The campaign is an initiative by the British Disaster Emergency Committee (DEC) to offer aid to more than 16 million people who are in urgent need of food, water, and medical treatment in the region.

The four-time Olympic champion was recently appointed as the ambassador for Save the Children, one of 13 aid agencies working under the DEC. 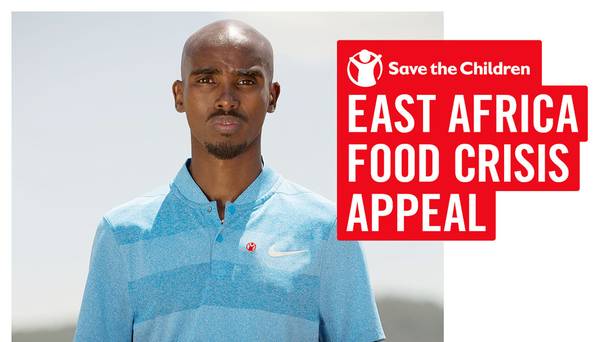 Mo Farah named the ambassador of Save the Children. Photo credit: Flapship

Speaking on why he supports the initiative, Farah told Sky News, “As a Father of four, it hurts to see children without food and water, but this is a reality being faced by parents in East Africa right now.

“I was born in Somalia, and it breaks my heart to hear stories of how families are suffering.”

International news channels, such as Sky News, the BBC, Channel 4, Channel 5, and ITV, are expected to air video appeals for donations to assist those affected by the food crisis, with the U.K. government promising to match public donations up to £5 million, which will go to the affected families in Somalia, Kenya, South Sudan, and Ethiopia.

A large portion of East Africa is currently experiencing the worst drought to ever hit the region in 60 years, with the United Nations declaring famine in some parts of southern Somalia, including lower Shabelle and southern Bakool.

Analysts are warning that southern Somalia will suffer severe drought within the next two months if the current crisis persists.

The situation in Somalia has been exacerbated by the continuing civil war between al-Shabaab and government forces – a similar situation of fighting that is also being experienced in neighboring South Sudan, the world’s youngest nation.

In other countries, such as Kenya and Ethiopia, successive seasons of failed rains have led to acute food and water shortages, malnutrition, mass displacement, and communal conflicts over meager resources.

People and livestock are dying every day from starvation, with children being forced to stay out of school because of hunger.

Although respective governments are doing what they can to minimize the effects of drought, they do not have enough relief supplies to satisfy all the affected areas.

The World Food Program has warned that the current food crisis in the arid and semi-arid areas is likely to worsen, with widespread drought expected to continue up to the end of the first quarter of 2017.