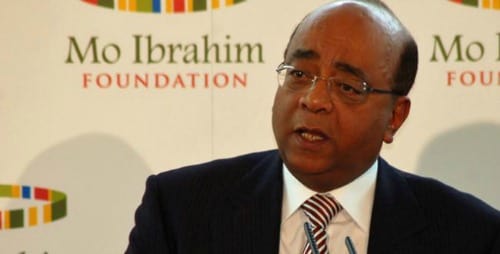 Sudanese-British entrepreneur, billionaire, and philanthropist Mohamed “Mo” Ibrahim (pictured) has applied his wealth and influence to promote stronger governance and leadership in Africa by way of the Mo Ibrahim Foundation. In a special editorial provided to CNN, Ibrahim applauded the significant economic growth happening on the continent but urged that unity among Africa’s 54 nations needs to be strengthened in order for Africa to fulfill its potential.

RELATED: Nigeria Has Africa’s Biggest Economy Due to Fast-Growing Industries

With recent news that Nigeria possesses the strongest economy in Africa and a steady growth in GDP numbers over the past decade, Ibrahim sees this as a mostly positive sign. However, Ibrahim said in his own words that it is “time for Afro-realism” when touting the vast potential and prominent resources found throughout the continent.

Using numbers tallied from the 2013 Ibrahim Index of African Governance report, Ibrahim noted “that 94 percent of the population of the continent is now living in a country where the overall level of governance has improved since 2000.”

Let us first stop talking about “Africa” as a homogeneous and uniform whole. We are a mosaic of 54 countries, each with its own flag, its own borders, and its own embassies. The African Union, whose 50th anniversary we have just celebrated, is still a long way from European-style Union, with its common market, single currency, supra-national political bodies and common and shared budget. And the road to convergence between the 54 countries is a long one.

Without effective economic and political regional integration, we will not carry sufficient weight in this globalized world, no matter how much “potential” we may have. Only unity, coherence, and internal solidarity will allow us to assert ourselves on the global stage.

Ibrahim also spoke at length about the explosion of the youth demographic, and warns that the spoils of the continent’s growth do not immediately transfer to those who need it most. Saying that young people are “disconnected” with politics and an overall absence of economic opportunity, Ibrahim insisted that the gap of inequality on the continent continues to rise.

Africa has a vast reservoir of natural resources, but to leverage this, and guarantee ownership of the African citizens, much remains to be done: ensuring transparency of contracts, creating local jobs, upgrading the value chain and redistributing wealth. Today, 90 percent of Nigeria’s oil is still being exported from the continent, while just 25 percent of the sub-Saharan population has access to electricity.

Ibrahim added that African nations should look within and turn away from international support and instead embrace regional integration. Ibrahim closed with a call for the nations to collectively find ways to govern that isn’t predicated on outside involvement.