Latest reports indicate that life is quickly changing for residents of Beira City, the second-largest city in Mozambique, as their houses and businesses continue to slowly sink into the Indian Ocean.

Businesses, homes and farms near the ocean are slowly subsiding, leaving hundreds of people homeless and without a source of income.

With close to 60 percent of Mozambique’s population living in the coastal region, experts are worried that the current phenomenon might leave a large number of people exposed to the rising sea levels and other hazards that come with it.

In recent years, massive tropical hurricanes off the Indian coast have been causing catastrophic floods in Beira and other Mozambican cities along the coast. The situation is even worse when it rains as the city’s ancient drainage system clogs up for days, forcing residents out of their homes.

With homes and schools drenched with sewage water, residents are left exposed to deadly diseases such as cholera and typhoid. Sadly, experts warn that the severity of storms and flooding in Beira are only going to increase due to the ongoing climate change. 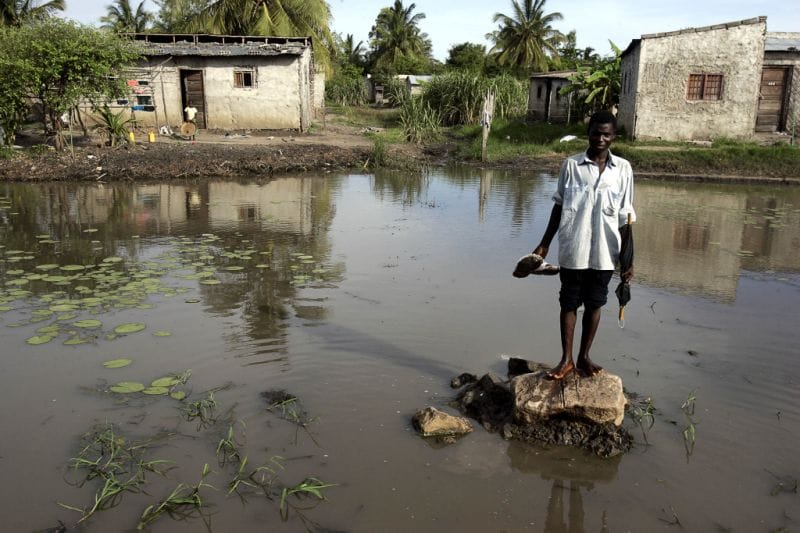 It’s a warning that has left many Mozambicans, especially those living along the ocean, worried about their future given that Mozambique is one of the poorest countries in the world and is ill-equipped to handle major disasters.

“We don’t have any idea what to do as the water is keeping on coming and destroying our crops,” Bento Saide, a small-scale farmer in Beira told Al Jazeera.

The coastal city, which was established in the 19th century, was designed to host less than 50,000 people, but nowadays it is home to over 500,000 people, majority of them living in the slums.

Speaking to Al Jazeera in a recent interview, Beira’s Mayor Daviz Simango said that the city needs more than $100 million to address this problem. In 2014, the Mayor partnered with private companies to draw a climate-adaption master plan that would be implemented over a period of the next 18 years.

Simango is also working towards making Beira city greener by planting thousands of mangrove trees, which are known to be quite effective in preventing floods, along the shores of the Indian Ocean.

“We’re going further with this project and turning our green belt into a recreational area,” Simango was recently quoted by the Prevention Web.

The mayor has also partnered with a local NGO to run awareness campaigns in a bid to educate communities about the importance of reducing disaster risks. He wants to use Beira as a model for others cities along the Indian Ocean.