For close to five years now, South Sudan, the world’s youngest state, has not had peace as government forces and rebel groups continue fighting over power. The war, which started in December 2013 after the current President of S.Sudan Salva Kiir fell out with his former vice-president Riek Machar, has left thousands of people and millions displaced.

Most of these refugees have sought asylum in the neighboring Uganda, where they’ve set up camps as they wait for normalcy to return in their country. Given the meager resources available in Uganda to take care of the growing number of refugees, living conditions in the refugee camps continue to deteriorate by the day.

And although the refugees get some support from the United Nations Refugee Agency (UNHCR), it’s often not enough to sustain them for the long haul. But in the midst of all the despondency and adversity, South Sudanese refugees have found different ways of eking out a living.

Survival of the Smartest

In a recent interview with the BBC, some of the refugees showed how they are making ends meet while at the same time helping to grow the Ugandan economy, albeit in their own small ways.

Penina, a mother of four, fled South Sudan after witnessing merciless slaughter of women and children by the rebels. She was forced to leave her husband behind since he did not want to leave the country.

Before the war broke out, Penina owned a salon in Yei, their hometown. She is now using her hairdressing skills inside the Ugandan refugee camp to make some money for her family’s upkeep.

“God has given me all this. I have to use my brain to do something, rather than stay idle,” Penina told the BBC. 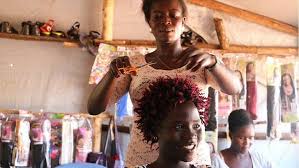 Not far from Penina’s salon, which is made up of a UNHCR tent mounted on several pieces of wood, is a young man selling charcoal. His name is Abdul Karim Ali, a Ugandan businessman dealing in charcoal, which is mostly cured by refugees living in Imvepi refugee settlement.

Mr. Ali admits that the presence of South Sudanese refugees in the area has had a positive impact on the area’s economy, adding that many of the parcels of land that used to be unproductive bushes are now being cleared for farming by the refugees.

Markets are also sprouting within the refugee camps and in the surrounding areas, and small businesses in the region are growing.

“We are all mixed up in the market, South Sudanese and Ugandan, doing business so that we can survive better,” Ali said.

But even with these opportunities, many refugees are eagerly waiting for peace to return so that they can go back to their homes and continue with the work of building their nation.