Deep within the less studied African Cosmology lies the Vodun Theology of the Fon people of Benin which started during ancient Dahomey days. In the genesis of all these is the Nana Buluku, an ancient goddess in the image of an old woman who is believed to be the creator of the world especially the cosmos who took the back seat after birthing the sun and the moon, her twin children. She is believed to be the most revered deity and the genesis of any form of worship and religion in West Africa.

As a deity, Nana Buluku comes in other forms among various West African traditional societies aside the Fon in Benin. She can also be found within the Ewe communities in Togo and parts of Ghana as well as among the Akans. She is also strongly present and revered in Nigeria, among the Yoruba and Igbo traditional communities. Among the Fon and Ewe in Ghana, she is known as Nana Bukuulu and Nana Bukuu; and Nana Kuruku among the Yoruba of Nigeria. The Igbos of Nigeria refer to her as the Olisabuluwa. The Akans of Ghana call her Nana Buruku. Among these societies, she is still actively worshipped as the mother goddess.

Nana Buluku is said to have created the universe and given birth to the moon and the sun. The moon is known as the divine spirit Mawu and the sun as the Divine spirit Lisa. In many folk songs and tales that give an account of her story, Nana Buluku retired after her hard work and left the world in the hands of her twin children Mawu and Lisa. To date, because of this account, many traditional societies fear and respect twins, especially those that come as boy and girl.

Adire cloth of the Yoruba

Nana Buluku is also known to be the wisest deity who is known to keep her wisdom and the power of her twins in a calabash. Her world is represented on the adire cloth of the Yoruba, the primary design of the now popular tie-dye cloth.

During the slave trade, Nana Buluku travelled with her people on their ships. It is believed that her twins took turns in protecting the slaves, Lisa during the day and Mawu at night. The deities worked very hard with the water goddess Mame Wata to help the slaves travel safely to their new worlds. 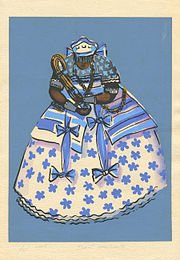 Nana Buluku is well represented in the Carribean Islands, Haiti and Suriname societies after surviving the Atlantic slave trade and passing from generation to generation among slaves who worked hard on the cotton, sugarcane and tobacco plantations. She is also very present in Southern American communities, especially in Brazil. She is celebrated as Nana in Brazilian Candomble Jeje and Candomble Ketu where her image still remains as a very old woman and the mother of creation.

Nana Buluku can also be found in the Afro communities in France and Holland and the strongest and oldest deity and creator of the world blesses those that worship her to this day.

The deity has appeared in several comics and had her image misinterpreted as that of a man.