This is the embodiment of the life lived by Nigerian music legend and pioneer of the Afrobeat genre, Fela Anikulapo Kuti, who was born on October 15, 1938. He has since never died even after his transition from the world on August 2, 1997, at the age of 58.

Fela was a creative genius and a thorn in the flesh of politicians and oppressors who took advantage of their positions and power to dictate the way people should live and die. He lived and breathed for freedom and justice for the common people.

He left a legacy that has lived on and survived for decades with his songs maintaining their relevance today and his children pushing his signature activism through music as perfected by their father.

His eldest son, Femi Kuti, started playing with his father at the age of 15 and has never looked back as his voice is heard without fear or favour during social and political causes.

Femi’s younger brother, Seun Kuti, was only 9 years old when he began singing in his father’s band. He has also carried on his father’s legacy by leading his father’s Egypt 80 band.

Seun recently released a new album, Black Times, that addresses current political and social issues affecting Nigeria and Africa as a whole. This is his fourth as well as his first self-funded work recorded with the Egypt 80 band. The album has a similarity with the philosophy and style of Fela Kuti.

“Too many African rulers do not have the country’s best interests at heart. Too many people in Africa and the West have sunk or are sinking into complacency.

“These black leaders, they don’t represent black people’s interest. He [Buhari] fits that model. He doesn’t invest in the people, he only invests in businesses and the service industry. That’s one of the major reasons I don’t support most black leadership here,” Seun said in an interview early this year.

Fela Kuti has lived up to his adopted middle name “Anikulapo” which means “He who carries death in his pouch”, with the interpretation: “I will be the master of my own destiny and will decide when it is time for death to take me”. Like a prophecy, he has never been forgotten and his name is still mentioned each year with events to commemorate his life and legacy.

His music is on replay even in the 21st century with renditions, masters, Broadway shows, bands and many other entities inspired by Fela Kuti that signify his musical immortality.

Every year, Fela Kuti is celebrated during the week of his birthday at the annual Felabration music festival in Nigeria from October 15 to October 21, 2018. Thousands of fans attend the festival held at the New Afrika Shrine in Ikeja since its inception in 1998.

Created by Fela’s daughter Yeni Anikulapo-Kuti, Felabration 2018 will be celebrated under the theme ODOO ‘Overtake Don Overtake Overtake’ coined from his 1990 hit. The festival will include a symposium, debates, art exhibition, dance competition and a music concert that will feature top African and international artists. 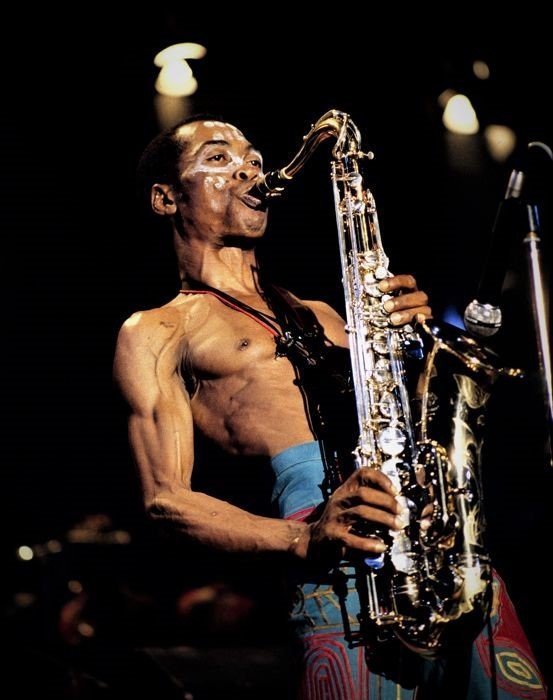 Who is Fela Anikulapo Kuti?

Olufela Olusegun Oludotun Ransome-Kuti was born in 1938 to an educated middle-class family.

His father was an Anglican minister and teacher, and his mother was a feminist activist while his two brothers were medical doctors.

Fela was sent to London in 1958 to study medicine but diverted to music at the Trinity College of Music where he formed the band Koola Lobitos.

He later married in 1960 and moved to Nigeria in 1963 where he trained as a radio producer for the Nigerian Broadcasting Corporation.

The trumpeter re-formed his band in Nigeria which played a Jazz and Ghanaian Highlife fusion.

Fela moved to Ghana in 1967 where he named his musical fusion Afrobeat. The band played in the United States for months where Fela was attracted to the Black Power movement.

The band which was renamed The Afrika ’70 upon return to Nigeria recorded music about social issues from the regular love songs.

Fela formed the Kalakuta Republic community which had a recording studio and served as a home for band members and other musicians.

He further opened the Afro-Spot nightclub which was later renamed Afrika Shrine where he regularly performed and promoted the African traditional religion of the Yoruba ethnicity.

He changed his name to Fela Anikulapo Kuti, started singing in pidgin English and declared his Kalakuta Republic independent from Nigeria.

Fela became popular among the Nigerian public and unpopular with the government at the time which ordered raids on his community. He was beaten, arrested, home, records and instruments torched among others.

He married 27 women, most of them his dancers in 1978 to stand against the authorities who accused him of kidnapping women in his commune.

His popular song Zombie, which was released in 1977 created a lot of buzz and notoriety against ruling governments in West Africa.

Riots broke out in Accra during the performance of the song which led to the banning of Fela from entering the country.

He formed the Movement of the People (MOP) political party to preach Africanism. He vied for the Nigerian presidency in 1979. His candidature was rejected.

Fela Kuti fell out with the regime of then General Olusegun Obasanjo in 1979, Muhammadu Buhari in 1984 and later Sani Abacha for songs including Zombie and I.T.T. (International Thief-Thief).

He spent 20 months in prison under Buhari for charges of currency smuggling which was regarded as politically motivated. He was released from prison by General Ibrahim Babangida.

Fela changed his band’s name to Egypt ’80 to educate Africans about Egyptian civilization. The band embarked on international tours in the United States and Europe where he performed with stars including Bono and Carlos Santana.

The 1990s came with more challenges affecting the band’s release of albums. Fela and four members of his band were arrested for murder in 1993 and released on bond. He denied the charges.

Fela went off the radar as rumours spread that he was suffering from AIDS.

He died on August 2, 1997, at the age of 58. His older brother Dr Olikoye Ransome-Kuti announced at a press conference that the immediate cause was heart failure, but he had suffered from AIDS.

His eldest son, Femi Kuti, has maintained and managed his father’s Afrika Shrine where concerts and musical activities are held almost daily.