After the Nigerian government announced that it will use negotiation instead of force in having the rest of the schoolgirls abducted from Chibok and Dapchi returned alive, it seems the approach is bringing positive results. The country’s Defence Minister Mansur Dan Ali is optimistic that the girls would return in at most two weeks, according to the intelligence reports he has.

“It can be earlier; maybe a week, it can be two weeks, but we are on it, and I’m telling you with all sense of sincerity that we are closing in on them,” he told a local media Channels TV programme, Sunrise, adding that “I’m sure with the latest intelligence information we are getting, we shall get the girls soonest.”

There is a military option to bring back these girls by force but the president of Nigeria, Muhammadu Buhari is not interested. He recently indicated that Nigeria was working with international organizations and negotiators, to ensure that the girls were brought back unharmed.

“We are trying to be careful. It is better to get our daughters back alive,” Buhari said as quoted by local media PM News. He disclosed this when he received the American Secretary of State, Rex Tillerson, in an audience at State House, Abuja, earlier this month.

But the recent assurance by the state that the girls would come back home in two weeks has raised suspicions of some political opponents. According to the Peoples Democratic Party, PDP, National Publicity Secretary, Kola Ologbondiyan, the Minister’s assurance shows that the government knows the whereabouts of the girls.

“If the minister said the girls will be rescued soon, that raises a lot of questions. It shows that there is a conspiracy on the part of government. That also means that those who said government kept the girls somewhere for a purpose know what they are talking about,” he told the Vanguard in an interview. 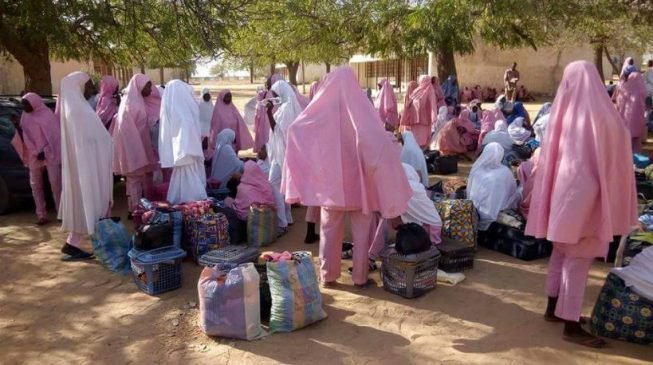 Tension is high in Nigeria ahead of its 2019 general elections, particularly in terms of security. Nigeria’s militant Islamist group Boko Haram is fighting to overthrow the government and create an Islamic state. It has so far caused havoc in the country through series of bombings, assassinations and abductions.

The Nigerian Army earlier this year commenced road construction into the heartland of Sambisa forest in a bid to dislodge remnants of the Boko Haram sect who often use the forest as their hideout. But that did not deter the group from striking again last month, attacking a boarding school in northern Nigeria and kidnapping over 100 of the schoolgirls.

When a similar incident occurred four years ago with the Chibok girls, some of the girls were released after negotiations to have them exchanged for Boko Haram prisoners and ransom payments. President Buhari has chosen that same option to bring back the girls but some are not enthused. Critics of this approach say by paying ransom to Boko Haram, the government was indirectly financing the terrorist group and this will ultimately hurt the country.