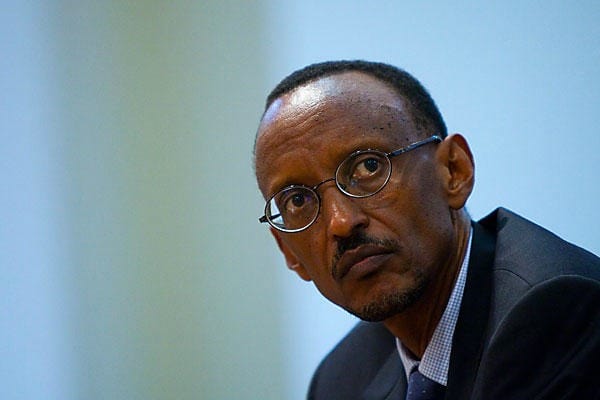 Paul Kagame (pictured), president of Rwanda since 2000, is serving the second of his seven-year term as the nation’s leader. In a recent talk Kagame gave in America, Kagame seemed to support rumors that he could be seeking an unconstitutional third term in office.

Kagame’s term ends in 2017, but state-controlled media reports point to the idea that the leader may try to extend his rule. Appearing at Tufts University in the United States, Kagame addressed the reports and had an icy response to questions regarding the presidential chatter.

As reported by The Guardian:

“I think at some point we need to leave countries and people to decide their own affairs,” Kagame told students and faculty staff after a speech at Tufts University near Boston, in the U.S. “Why I’m saying that is because I’m asked when and whether I plan to leave office – right from the start of my first political term in office. It is as if I am here just to leave. I’m here to do business on behalf of Rwandans.”

He added: “I don’t know what else I can give you on that, but let’s wait and see what happens as we go. Whatever will happen, we’ll have an explanation.”

Kagame has not said he will alter the term limits, but other African leaders have done so in the face of sweeping resistance. Ugandan president Yoweri Museveni has ruled his nation since 1986, removing term limits in 2005.

Kagame also fought in Museveni’s rebel army in helping the leader come to rule in Uganda.

Meanwhile, politicians from opposing parties and others have voiced their concerns regarding Kagame’s presidency and whether he will respect the rule of law.

“We’re very concerned because over the years he has said he will respect the constitution. For him to stay on, the constitution would have to be changed by referendum and we are against that. It will not be good for the country and will outdo some of the positive things he had done,” said Frank Habineza, president of the Democratic Green Party of Rwanda.

Kagame’s rule came in to being after his predecessor, Pasteur Bizimungu, stepped down. Kagame served as the country’s vice president and minister of defense from 1994 to 2000 until Bizimungu’s resignation moved him to president.

Kagame also was the leader of the rebel Rwandan Patriotic Front forces, which helped to overthrow the extremist Hutu government responsible for the 1994 genocide that killed a reported 1 million Tutsi and Hutu people.