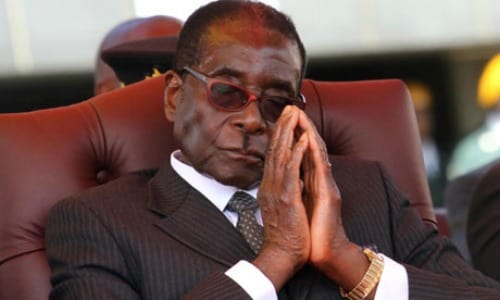 Zimbabwe President Robert Mugabe (pictured) has disclosed that he earns US $4,000 per month or US $48,000 per year. His salary is the lowest for any head of state and/or government in southern Africa, reports Herald.co.zw.

In an interview with Ghanaian-born British journalist and filmmaker Roy Agyemang for a BBC documentary titled “Robert Mugabe @ 90,” which was aired over the weekend, Mugabe disclosed his salary.

“I am earning US $4,000 just now, because of the hard times this is what we decided on, that we should recognize the hard times at the moment,” President Mugabe said.

The money, he said, was pocketed by about 3,000 individuals who sat on boards or were chief executives and senior managers of the country’s 78 parastatals and state enterprises.

According to figures released by the government last month, the highest-paid chief executive was former Premier Medical Aid Society (PSMAS) boss Dr. Cuthbert Dube, whose total guaranteed pay came to US $230,000 basic salary and $305, 499 in allowances.

Meanwhile, the PSMAS had accumulated a debt of more than US $38 million as of December 2013 – the majority of which was due to service providers — making it difficult for members to access health care.

While PSMAS is not a government entity, state employees weigh in with 80 percent of the society’s contributions.

The highest-paid boss at a parastatal, according to the Finance Ministry, was Mr. Kangai who took home US $43,693 monthly, while ZBC’s suspended CEO Mr. Happison Muchechetere took home at least US $37,050.

Government and other analysts have allayed fears that the remuneration cap will result in skills flight, saying Zimbabwe had enough expertise to run the public sector.

Finance and Economic Development Minister Patrick Chinamasa has also challenged any public sector boss unhappy with the cap to take up the matter in court.

Here are what other Presidents earn annually: