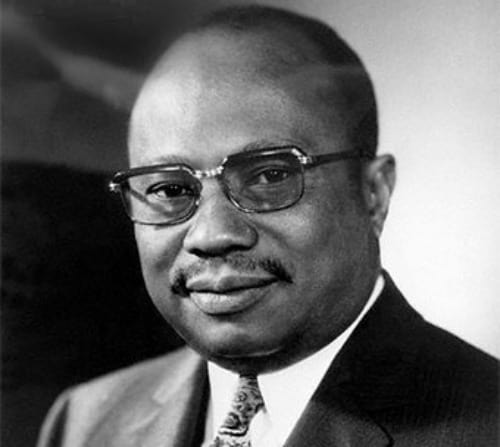 Liberia’s 20th President, William Richard Tolbert (pictured), who was of Americo-Liberian ethnicity, hailed from one of the largest families in the country. Due to tensions between Americo-Liberians and indigenous peoples of the nation, a military coup ended Tolbert’s life on April 12th, and several cabinet officials would violently join him in death 10 days later on this date.

SEE ALSO: Liberian Exodus From America To Africa Began On This Day In 1878

Tolbert, a descendant of the African Americans who arrived in the Liberian Exodus of 1878, was involved in politics from the age of 30 until his death. Tolbert rose to the role of President after 19 years as the country’s vice president under William Tubman who died in 1971. Tolbert inherited a rich country, which at the time had the world’s largest mercantile fleet and the world’s largest rubber industry. Liberia was also a chief exporter of iron ore.

Tolbert was part of the True Whig Party, seen mostly as an Americo-Liberian oligarchy by other rising political groups. There was also some talk in the country that Tolbert applied sweeping nepotism in his cabinet appointments and economic policies. Turning away from President Tubman’s pro-West ideology, Tolbert promoted African independence despite several groups and indigenous people wanting to see some of the windfall of Liberia’s economic boom.

Trouble began to brew when Liberia switched from one ruling party to a two-party system with the introduction of the Progressive Alliance of Liberia (PAL) in 1978 led by Gabriel Baccus Matthews. In April 1979, the “Rice Riots” were sparked, after the country’s minister of agriculture moved to raise the price of rice in a bid to get farmers to stick with the trade and not move on to more lucrative jobs, such as rubber production.

Although Matthew’s PAL members organized a peaceful march, it devolved into a bloody riot, where thousands of dissatisfied indigenous Liberians took to the streets and began looting.

Tolbert ordered the banning of the PAL and arrested Mathews and other key members of the group for treason in March 1980. The next month on April 12th, Liberian Army soldiers led by Master Sargent Samuel Doe entered the presidential palace and reportedly killed Tolbert as he slept.

Conflicting reports state that Tolbert was actually sleeping in his office when he was killed in the coup. Either way, Tolbert and 27 other bodies were thrown in to a mass grave, where many Liberians vandalized the grave site.

After a kangaroo trial, four out of 13 of Tolbert’s cabinet members were sentenced to death by Doe’s “Redemption Council” and executed, according to reports.

Video taken of the execution revealed that the cabinet members were stripped of their clothes then tied to stakes on a beach in view of the public and shot by the military.

In August 2008, the Truth and Reconciliation Commission (TRC) in Monrovia heard testimony from Doe’s former justice minister, Chea Cheapoo, who alleged that America’s CIA was responsible for killing Tolbert. There was also an account from Tolbert’s wife, Victoria, claiming she saw a White man stab and kill her husband. Those claims, though, have not been supported by sound research.

SEE ALSO: Zimbabwe Declared Independent On This Day In 1980