All hell broke loose on social media after a photoshoot featuring a white model posing with the endangered Baka pygmies of Cameroon was reshared months after it was published.

The photos, published in September 2018 and shared by the photographer and crew, show the white model wearing bridal and dinner dresses and posing with the Pygmies in their village located in the Dja Faunal Reserve – a UNESCO World Heritage Site in southeastern Cameroon. 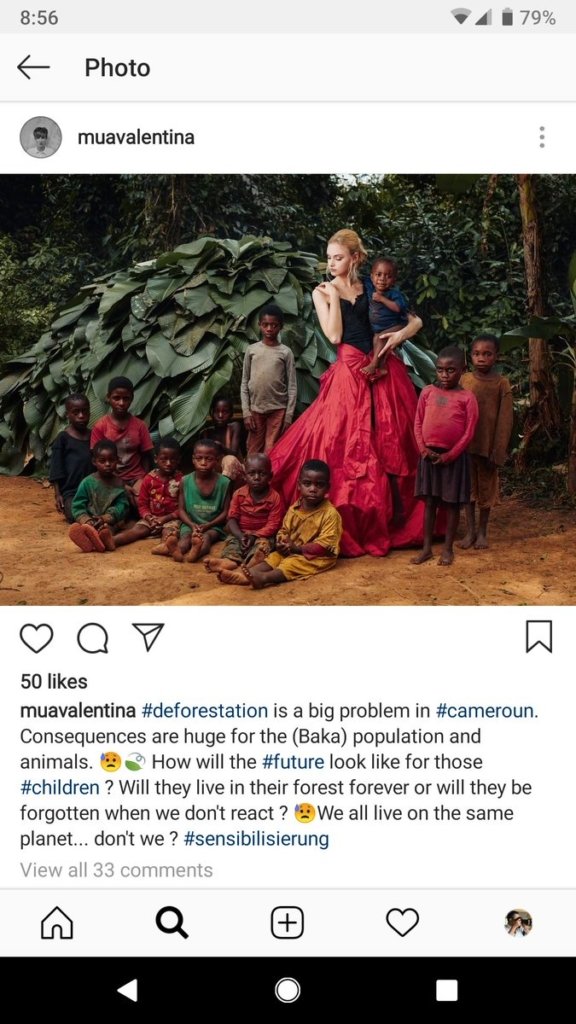 The elegant-looking white model sat and stood with the villagers and held their babies near their huts, in the rainforest and under trees while they looked on closely. The photographer described the concept as a “provocation”.

“Photographing a model in a grand prix dress in the midst of Baka pygmies dressed in rags is a provocation. The price of the dress would be enough to bring, in this end of the end of the world, what to live worthily [sic],” said Awamu Moja in a short statement explaining the photoshoot.

He continued that the Baka live simple lives of hunter-gatherers and semi-nomadic people “who lack all that civilisation could bring them” but “have not asked anything”.

“The Baka welcome the traveler, whoever he is, without thinking badly. Rich with a culture of wisdom and humility. So we throw on these photos a new look and we wonder: opposite ways of life, and then? Very smart who can say where is the true wealth,” the statement ended.

This didn’t go down well with social media users who first criticized the concept after Cameroonian art entrepreneur Diane Audrey Ngako shared it on Twitter in late January 2019.

She was forced to delete the post after heavy criticism from her followers for asking if the photoshoot was inspiring.

And if the model was black ?

It looks weird. This is not the image of Africa we want to see. Can y’all come up with something else!!? Always this Africa is poor blah blah. Is tired and thru. And putting that white girl in the photos, made it worse

Jfc, who thought it was a good idea to go with the “white angel of civilization descends from heaven to bless the natives” theme? I mean, isn’t it just a little old hat?

The criticism continued on Instagram under the post of make-up artist and hairstylist, Valentina Becker, who was a member of the crew that made the photoshoot. She was also forced to make her Instagram account private. 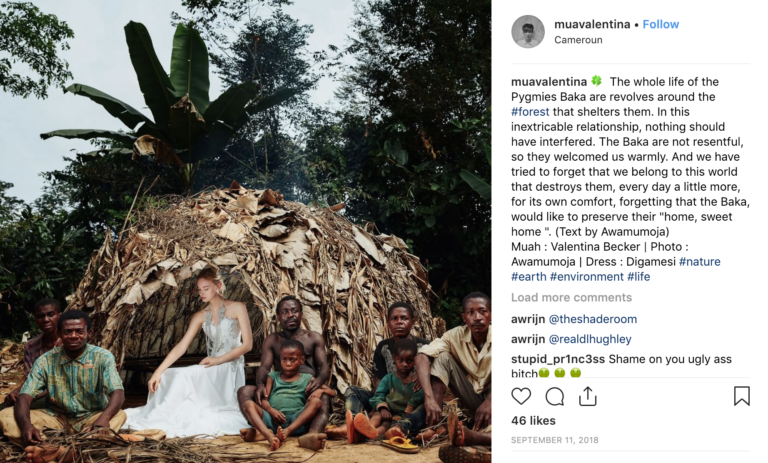 The behind-the-scenes video of the shoot posted on YouTube by the photographer was also made private and comments disabled after hundreds of criticism.

On Wednesday, photojournalist Chirag Wakaskar posted a screenshot of the posts by Valentina Becker and called out the photographer. “And today in white savior bullshit. Photographer – Awamu Moja.” he tweeted and added the link to Becker’s Instagram post which is no longer accessible.

‏
Wakaskar’s critical post generated a lot of attention and more criticism against the photoshoot which is going viral for the wrong reasons.

Here are some more reactions to the photoshoot.

What nonsense is this!

This is bizarre, especially the wedding dress. I really don’t understand.

So… a team of white creatives from Luxembourg branded themselves with a Swahili name and make these images? Do I have that right? https://t.co/DMZXmOUwSE

If anything comes out of these images, it is the fact that they expose the truth about racism that still lives so comfortably and boldly.

The horror! I just cant bear these kind of content. The one with the huts settlements is the worst