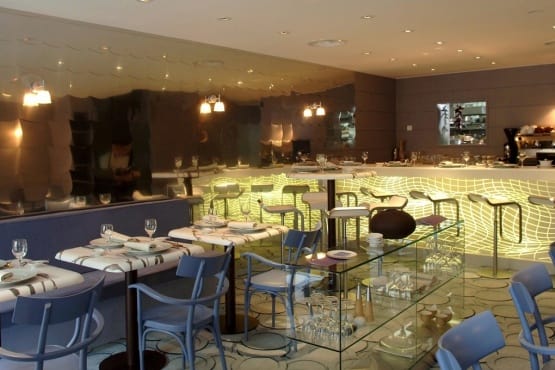 During my previous visit to Paris, I had the privilege to meet with Pierre Gagnaire (pictured at 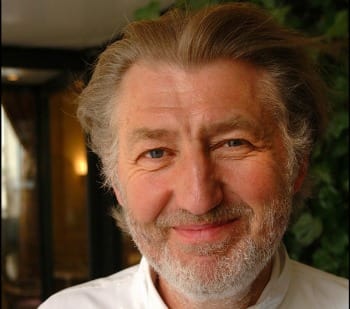 right), the chef who greatly contributed to changing the trajectory of French haute cuisine, from heavy and rich to light and fun.

In subtle and most creative ways, Gagnaire borrowed spices and flavors from other food influences and fearlessly reinvented a cuisine.

Today, his empire spreads to 11 restaurants peppered around the world from Tokyo to London, Dubai, Moscow, Seoul, Las Vegas, and of course Paris.

His Maitre D’, Ely Kane, who happens to be a good friend of mine from Senegal, had given him a copy of my first cookbook “Yolele.” Little did I know that this would trigger a series of wonderful events that transformed my Paris trip into a memorable experience.

On our first night, Ely arranged a reservation for my wife and I at Gaya (pictured top), Pierre Gagnaire’s restaurant in the St. Germain Des Prés’ neighborhood. Throughout the entire evening, soothing Afro-salsa music by my favorite Senegalese all-stars Orchestra Baobab was played, which was a drastic change from the expected classical or jazz restaurants’ soundtracks.

We were treated with an unforgettable seven-course dinner.

First came a Dorade carpaccio with a cream of white beets and raifort cheese with pineapple brunoise, followed by crab cakes with curried mayonnaise served with capellini poached in a spicy seafood broth. Next came a velvety purple and white soup with pike-perch and turmeric quenelles, crunchy radishes, and dragon fruits. For “Essentiels” we had a heart of rump steak with a radicchio and hazelnut oil puree served with an Asti Muscat and ratte potato gnocchi and shallot confits.

The “Marée Modeste” was a flaky Pollack with Thai grapefruits and mangoes and green pepper threads. For the “Marée Noble “ course came sautéed langoustines with black pepper and Fleur de Sel served with saffron rice and Piquillo gratin. At last, for dessert we enjoyed a kumquats, blood orange and grapefruits confits, shortbread with a royale of ginger and fresh cilantro. 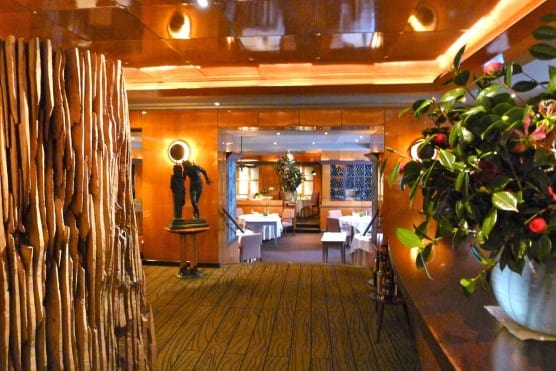 The next day, I received a call from Ely, asking me to stop by the eponymous Pierre Gagnaire’s (pictured above) restaurant that’s located in Rue Balzac, near Champs Elysées.

As my wife and I passed through the large and heavy wooden-carved doors of the restaurant, we were greeted by a charming host who told us that Chef Gagnaire was expecting us. Minutes later, Pierre Gagnaire himself came walking straight toward us with a wide grin through his bushy gray beard.

Before I could utter a word, he grabbed my head between his magic hands and leaned as if he was going to kiss me, he then silently placed his forehead against mine for a good couple of minutes as in a prayer. Afterward, he called a waiter and asked him to serve us champagne while he would give us a private tour of the kitchen.

The kitchen was like a temple, where more than 20 chefs quietly busied themselves over all sizes of pots and pans. Next was the pastry area, enclosed in glass temperature-controlled room with marble top counters on which sat stainless-steel bowls of all sizes and state-of-the-art baking appliances. The kitchen personnel seemed relax and friendly yet focused.

After the tour, Gagnaire graciously offered me a signed copy of his cookbook “Lucide Et Ludique” (which translates to “Perceptive and Playful”).

Needless to say that this was a blissful moment I will never forget.

However, the real lesson of the experience only dawned on me while we were leaving the restaurant. Next to its cathedral-size, carved wooden doors were a fluorescent neon art installation with a simple message: “Prends le Temps” (“take the time”).

It was his way of life, and it translated to his cooking: he humbly took the time to make me feel special, and it has become my mantra.

RELATED: A Chef’s Journey: In Search of Fonio in Senegal