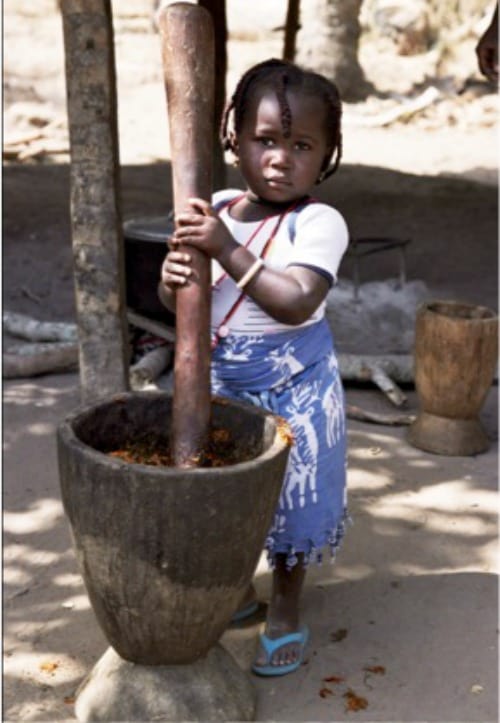 If there was one instrument that could symbolize the African kitchen, it would be, without a doubt, the mortar and pestle (pictured). One of the most common images of daily African life is a woman pounding food in a wooden mortar. It’s our blender/food processor/spice grinder all at once, but it is more than just a kitchen appliance. The mortar and pestle is considered sacred in many African countries.

In West African tradition, the mortar represented the strength of the family. In fact, it was said that the head of the family should never meet someone bringing or taking a mortar from the house.

In the Bambara tradition of Mali, a newlywed young bride had to sit four times in a row on a mortar. It was believed that the bride subjected to this rite would never divorce. In addition, the bride herself always brought a symbolic mortar and pestle among her belongings when moving in with her new husband.

With the Soninke people of Southern Senegal, when a stranger enters a house and sees a mortar upside down with the pestle sitting at its base, it means that there was a death in the family.

The sound of the mortar, for that matter, should never be heard at night unless there is a funeral. The mortar is then used to crush incense for the ultimate bath of the deceased.

Mortar and pestles come in all sizes. From the smallest used to blend pepper mixtures or other spices to the large ones used to prepare millet or rice flour or to remove the hull from grains or beans.

Everywhere in Africa, the thumping sound of the mortar and pestle is the sign that cooking has begun.

And the the pounding is often cadenced to accompany a song. The songs can vary depending on the occasion: funeral, weddings, birth, or just a lullaby for rocking the baby, who is securely wrapped to the back of the woman who is pounding along.

The mortar and pestle is the quintessential kitchen tool of the whole continent.

In Senegal, the mortar and pestle is usually carved from the wood of a mango tree, and unlike the sharp blade of the modern food processor that bruises the ingredients, the pestle crushes them in a way that helps release their fresh flavors and oils — and the difference in taste is palpable.

Purists in some rural areas still refuse to take their whole grains to the mill, although it’s faster and easier, it just doesn’t taste the same….

Enjoy the following pictures of mortar and pestles and look for Chef Pierre Thiam’s upcoming book, “Senegal From the Source to the Bowl” (working title) to be published by Lake Isle Press in Fall 2015.

Typical scene of pounding with baby rocking, tightly secured in the back. Photo Credit: Pierre Thiam

There is pounding even in Dakar’s modern kitchen. Photo Credit: Pierre Thiam

Julie Diatta from the village of Diakene Diola in Casamance (Senegal. Photo Credit: Adam Bartos, from “Yolele Recipes from the Heart of Senegal”