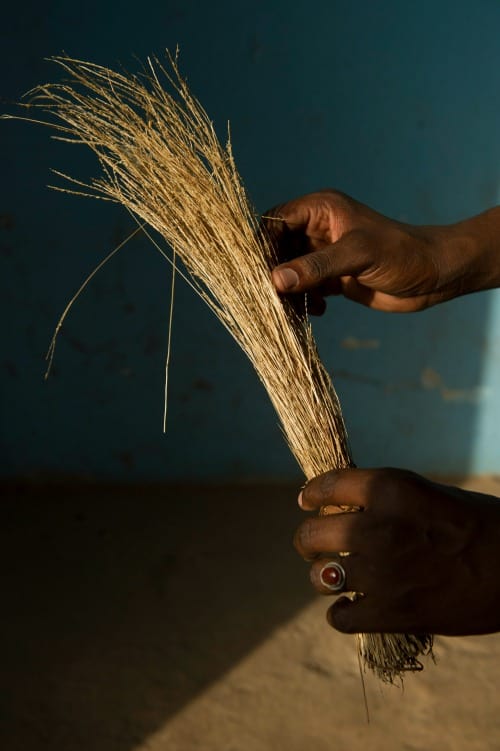 Fonio (pictured above) was the main reason for our journey to Kedougou, which is located in the southeastern region of Senegal, near the border of Guinea and Mali. 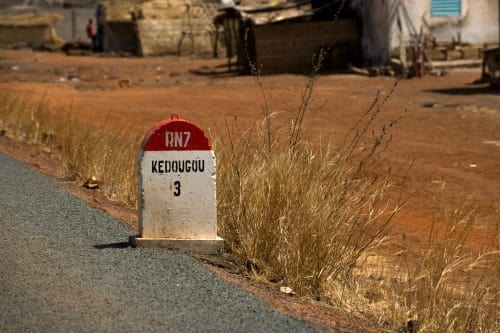 In this dry region, fonio is king. This drought-resistant grain matures within two months and is therefore the ideal food against famine.

But fonio is more than just a famine food.

It was once a major crop across Africa and was always considered the food for kings because of its delicate taste. In ancient Egypt, fonio was found in burial grounds as the grain chosen to accompany the souls in the afterlife. The Dogon people of Mali call it “Po” or “the seed of the universe.”  Fonio is more than 5,000 years old and is arguably the oldest-cultivated grain in the world.

When my car drove in to Kedougou, which was a chaotic 14-hour ride from Dakar at 109 degrees, I experienced three flat tires in a row with my traveling buddies, Evan Sung, his wife Jeanna, the seven-people team from GLP Films, and our driver Ousseynou. And needless to say, the drive had taken a toll on our crew.

However, all the pain seemed to dissipate from our aching bodies when Mrs. Aya Ndiaye — and the 25 founding members of her cooperative, the Koba Club — greeted us with songs, dance, and a feast for kings.

GLP Films’ crew had come along to make two short films commissioned by National Geographic around our itinerary with a focus on fonio.

For the past two years, Evan and I have been coming to Senegal regularly in preparation for my next book. Our mission is simple: Crisscross Senegal, my country, in order to meet and document the experience of food producers, farmers, fishermen, and other people involved in the food production so that we can follow the food process from the source to the bowl.

Consequently, “Senegal, From the Source to the Bowl” is the working title of my upcoming book.

We are now in the final stages of the book project, and this last trip is dedicated to the Kedougou region in general, and one of its most-enterprising daughters Mrs. N’diaye in particular.

One of the Koba Club women dancing in Senegal. Photo Credit: Evan Sung

N’diaye started the Koba Club cooperative more than 20 years ago. Her goal was to promote the production of local ingredients, such as fonio, Baobab fruit, Palm Fruit oil, and Shea butter. Today, their work is paying off and the Koba Club is now helping other women to organize. In fact, their cooperative has been recognized as an example across Kedougou, and N’diaye even received a special prize from the President of Senegal.

Using fonio, the Koba Club prepared a banquet for us, displaying several variations of the classics of Senegalese cuisine on a low bamboo table.

We also had “Yassa Poulet,” chicken grilled over wood charcoal and served with onion lime Confit over steamed fonio. For dessert, they served us fonio pound cake and “thiakry,” with the fonio replacing the traditional coarse millet couscous, and served with a homemade sweet milk curd called “sow.”

For drinks, we were served a mint-scented hibiscus infusion and a thick, sweet and sour baobab fruit juice that reminded of lassi.

Fonio is great for its versatility and as the Bambara saying goes, it “never embarrasses the cook.”

Want to try fonio for yourself? Try my fonio recipe here:

Fonio: Fonio (Digitaria exilis) has been grown in Africa for centuries. It is one of the most-nutritious of all grains. It is rich in methionine and cysteine and has amino acids that are vital to human health and deficient in today’s major cereals: wheat, barley, maize, rice and rye.