The Ishaqbini Hirola Conservancy in Garissa County, northeastern Kenya is now the center of attention after two rare white giraffes were seen roaming inside the conservancy two months ago.

The two magnificent giraffes, a mother and child, were first spotted in June by villagers who then alerted conservationists from the Hirola Conservation Programme (HCP), which runs the conservancy.

HCP now reports that the baby giraffe has some “conspicuous reticulates but with a small tinge of the white coloration that seemed to continue fading away leaving the baby white as it approaches adulthood”.

But the skin coloring on the mother giraffe is not as visible as the baby.

According to HCP, the white giraffes, which have dark eyes, are suffering from leucism – a genetic condition that inhibits the production of pigmentation in skin cells. 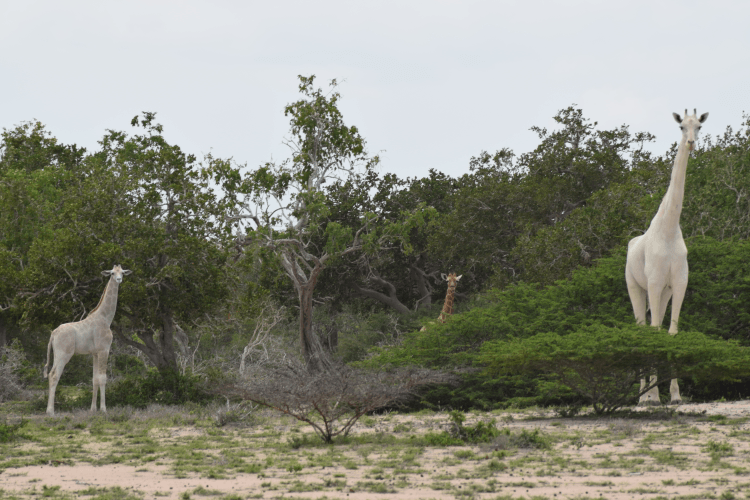 Unlike albinism in human beings, this condition allows the affected animals to continue producing dark pigment in their soft tissues, which explains why they have dark eyes.

The organization also reveals that sightings of white giraffes are becoming quite common nowadays, with the first two findings having been made in Kenya and neighboring Tanzania.

The first ever sighting of a white giraffe was reported in January 2016 in Tarangire National Park, Tanzania, followed by a second sighting in March the same year in Ishaqbini Conservancy, Kenya.

Sightings of the rare animals have become so common in and around the Kenyan conservancy that locals are now competing to report their discoveries.

“The communities within Ishaqbini have mixed reactions to the sighting of this leucistic giraffe and most elders report that they have never seen this before,” HCP writes on its website.

The International Union for Conservation of Nature has listed reticulated giraffes as “vulnerable” and estimates that there are about 8,500 giraffes suffering from the condition across the world.

Most of these giraffes live in Somalia, Ethiopia, Tanzania and Kenya.