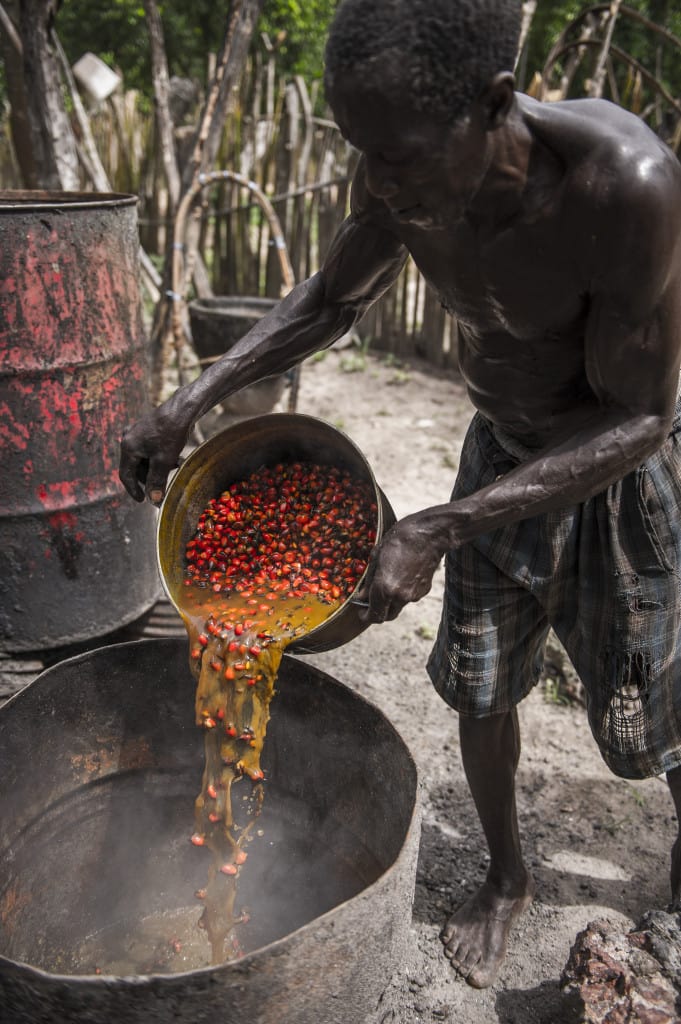 Red palm oil (Elaeis Guineensis) is arguably one of the most-controversial ingredients of our time. Lately, the Red Gold, as it is nicknamed by some of its fiercest supporters, has become the subject of many passionate debates. Considered nature’s gift to the world by some, Palm oil is seen as a curse by others. So which one is it?

Until the late-1960s, palm oil was Africa’s best-kept secret, where it was almost exclusively produced and consumed.

It is only in recent decades, with the rising demand for palm oil, that Southeast Asian countries, such as Malaysia and Indonesia, began to grow palm trees. Subsequently, these regions quickly became the world’s largest producers of palm oil.

This achievement greatly contributed to turning those countries into economically emerging nations.

This rising popularity is due to palm oil’s relatively low production cost, and most importantly, because it is the perfect substitute to the discredited hydrogenated fats, such as soy, corn, and cottonseed oils.

Today, it is likely that many of your favorite snacks are prepared with palm oil. Pizza dough, ice cream, cookies, instant noodles, chocolate, to name a few, all use palm oil in their formulations.

With a fast-growing world population, analysts have long concluded that the demand for prepared food products is bound to increase, and along with it, the consumption of red palm oil.

In fact, palm oil’s considerable profitability is now seen as a clear way out of poverty, and its production is expected to double in Africa in the next 15 to 20 years.

However, in recent years, palm oil has also been subjected to a de-facto witch hunt.

Since palm oil trees only grow in the tropics — and considering that the highest segment of its consumers are generally young, urban westerners with more disposable income — it is obvious that its growing relevance has many competitors worried.

Particularly concerned are the lobbyists from the Mediterranean region who see this increase as a direct threat to their markets.

Therefore, it is not surprising that we find ourselves caught in the middle of this economic war wondering what all the fuss is about: On what basis is palm oil being demonized? Is palm oil bad for you? What are the alleged nutritional issues of palm oil?

Palm oil production will indeed offer wealth and development in Africa as it has in Southeast Asia; however, the Southeast Asian boom of palm oil came at the cost of millions of acres of tropical forests that were destroyed for the sake of planting palm trees.

During a trip to Cameroon, I couldn’t help but notice that this phenomenon was unfortunately gaining ground in Africa.

While traveling from Douala to Limbe, a group and I drove through miles of manicured palm tree plantations.

Where luxuriant tropical forests once stood, providing a critical habitat for endangered species, corporate land grabbing has substituted the forests with perfectly lined up palm trees.

Although the threat to biodiversity is an argument that should not be taken lightly, it is also important to note that fragile ecosystems, such as rain forests and savannas, have also been deeply impacted by the mass production of soy and corn.

So why does it seem that the demonization of palm oil has a louder echo?

Riding on the environmentalist bandwagon are the same lobbyists who are also looking for nutritional reasons to blame palm oil.

However, it is important to distinguish red palm oil from palm kernel oil (pictured below).

As opposed to the highly processed palm kernel oil, which is colorless, red palm oil has a deep orange color due to its rich content of beta-carotene  at 10 times the amount of carrots.

Extracted from the flesh of the palm fruit, red oil has an incredible amount of health benefits.

In fact, rich in vitamins A and E, antioxidants, and co-enzyme Q10, red palm oil is now considered a super food.

And studies have demonstrated that it can lower cholesterol and maintain proper blood pressure.

So what should the conscious consumer do?

Populations of Central and West Africa have been enjoying palm oil’s subtle yet complex benefits for more than 5,000 years.

We love how it combines with okra in our stews over fufu or how delicious it is when simply drizzled over steamed rice with salted fish (Guedj*), fermented Dawadawa,** and grilled whole fish.

We still rely on it as the perfect finishing ingredient in a cassava or a Moringa leaves sauce.

We also know that palm oil has medicinal properties; my grandmother often used it as a go-to remedy for many ailments.

How Palm Oil Is Prepared

The remaining water is strained and used to prepare stew. The strained fibers are fed to chicken and ducks or mixed with honey and shaped into small balls, a healthy treat for kids. The remaining hard kernels are either given to roaming pigs or planted for more trees.

This is the palm oil that the conscious consumer should look for: palm oil sourced from small farmers that has been extracted naturally, without industrial hydrogenation, and has been made for countless generations in Africa.

There is no need to destroy forests when there are millions of acres of arable land in degraded savanna or agricultural areas that can be converted to grow palm fruit trees.

Palm trees will then truly become Nature’s Gift to the world.

** Dawadawa a.k.a. soumbara in Mali and nététou in Senegal is a fermented locust bean from the nere tree. It has a strong pungent smell and is widely consumed in West Africa as a seasoning bringing a great umami flavor to the finished dish.