Ño Remigio Herrera Adeshina Obara Meyi was an enslaved Yoruba priest.  Ño and his mentor, Carlos Adé Ño Bí are the main successors of the Ifá religion in Cuba. 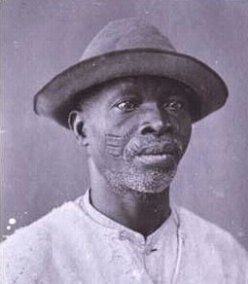 Ño is a title which denotes a sign of respect as sir would. Adeshina means “crown opens the way” in the Yoruba language.

Adeshina was born in 1811 or 1816 in Ijesha, Osun State, Nigeria.  Sold into slavery in the 1830s, he was transported to Cuba.  In 1833 he was baptized in Nueva Paz and given the name of Remigio Lucumí. Lucumí was a common name bestowed upon the Yoruba slaves brought to Cuba due to slavery.

Upon his capture, Adeshina swallowed a replica of the Orisha Orula or Orunmila.  This would later serve as a wise decision as he was able to master the use of the divination tool.

He later defecated the Ekin nuts he ingested which he would later keep on his person for divine readings and work, as documented by Frank Baba Eyiogbe in his book “Babalawo, Santeria’s High Priests: Fathers of the Secrets in Afro-Cuban Ifa.”

Adeshina was enslaved for thirty years and was employed by Don Miguel Antonio Herrera in Nueva Paz. Because of his special skills and excellent work ethic, Adeshina was sent to work for his master in Havana.

Adeshina’s intelligence also won him favor with his master and garnered the ability to practice his faith efficiently.

In Rule, Adeshina met his future confidante, Carlos Adé Ño Bí, a freedman who later paid for Adeshina’s freedom in 1850. The payment in conjunction with Adeshina making a factual revelation about his master’s guests secured his release. Adeshina made a circle using dried orange skins and branches of a vine to conjure a reading that saved the guests’ business ventures and saved them money.

Carlos Adé Ño Bí was also the owner of a winery which also served as space for Adeshina to perform his rituals.

After his release from slavery, Adeshina became mobile in the urban Cuban society and got married.  He first laid roots as a freeman in Matanzas City.  He previously lived in Rule where his daughter Josefa Herrera (Pepa Eshu Bí) and son Teodoro Herrera were born in 1864 and 1866, respectively.

He frequently traveled to Havana where he gained the skill of stonemasonry.  He also trained others in the Lucumì religion.

By the late 1860s, Adeshina set up a home in the village of Regla.  He also owned real estate property at Calle Morales which is now known as Street Perdomo.

Adeshina was highly respected as a wise ancestor and performed in many religious functions. He was greeted with a kiss on the hand and his admirers lowered their body on one leg as a Catholic priest would in a church setting.

He also had his likeness copied on portraits and appeared in Cuban newspapers which was a rare occurrence for Africans in the country.