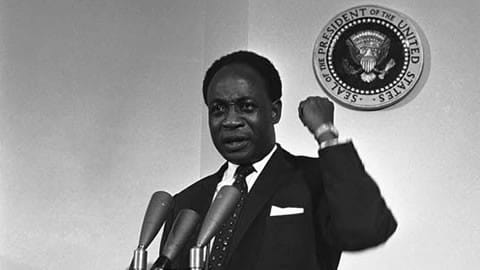 Osagyefo Kwame Nkrumah was a Nationalist Leader and Ghana’s first President and Prime Minister from 1957 -1966 before being overthrown. His passion and drive for a united Africa earned him the title of “Father of Pan-Africanism.” More than any other leader in Africa, he promoted African unity and freedom.  After Ghana achieved independence in 1957, he convened the first Conference of Independent African States in 1958. He was a leading figure in the Casablanca Group of African leaders and one of the leaders who founded the Organisation of African Unity.

Nkrumah had a good relationship with several world leaders and was a major advocate and proponent of the United Nations. He vehemently opposed the entry of African states into the Common Market of the European Economic Community. In spite of the coup that ended his presidency, he had good followership in Ghana and all over the world. He died in Bucharest in 1972.