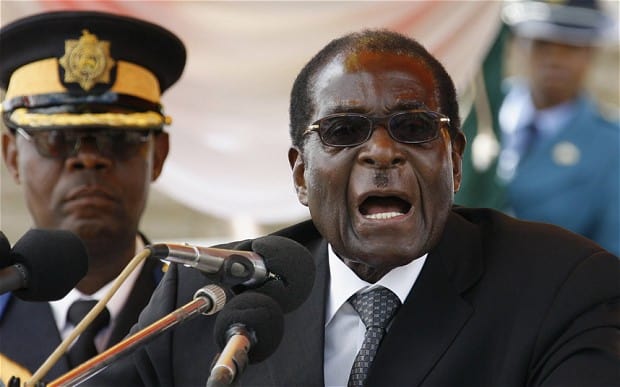 On Friday, controversial Zimbabwean President Robert Mugabe (pictured) reiterated his position that Whites have no place in his country, according to NewZimbabwe.com.

Reportedly speaking in Shona at a chief ceremony in his native Zvimba, President Mugabe spoke to the sanctions the West have enforced against his country, saying that he and his nation would not be intimidated for his decision to not allow Whites a place in his homeland.

“The West prefers a weak leader who, they hope, would allow the Whites to come back.

“They think if they intimidate us we will be cowed and allow the Whites to come back; that will never happen.”

Mugabe then pointedly explained where Whites needed to redirect their efforts.

“Don’t they (Whites) know where their ancestors came from? The British who are here should all go back to England.

“What is the problem? We now have airplanes, which can take them back quicker than the ships used by their ancestors.”

In July, Face2Face Africa reported on the 90-year-old Statesman’s last speech, which set off a firestorm of controversy. At the time, Mugabe spoke to the White farmers’ issue in Zimbabwe, ultimately declaring that no Whites should own land.

“There are White farmers who are still on the land and have the protection of some cabinet ministers and politicians as well as traditional leaders.

“I have been given a list of 35 White farmers in Mashonaland West alone and in just a few districts that have been audited. We say no to Whites owning our land and they should go.”

President Mugabe also took the time to explain the disparities he found in his nation with Whites living as “king and queens” in his land,” adding, “They [Whites in Zimbabwe] were selling to each other among themselves, and we will not recognise any of that nonsense. They were living like kings and queens on our land and we chucked them out. Now we want all of it.”

Before closing his most-recent speech, President Mugabe made it a point to warn Zimbabweans to stop engaging in farm partnerships with Whites. Some previous landowners were reportedly re-gaining property, even though his land reform initiatives are solely meant for Blacks.

“You have to stop bringing these Whites back…it’s a dangerous, dangerous arrangement which we do not want,” he said.

“If it’s contract farming with companies that we know to be genuine we can accept that, but never with individual Whites.”

RELATED: Should Robert Mugabe Really Be Criticized for Partnering with China?