South Africa and Kenya are the only two countries in Africa where there was complete Internet freedom in 2016, according to a report published by independent watchdog organization Freedom House. Out of a score of 100, South Africa and Kenya rank at 25 and 29 respectively, notes the survey titled “Silencing the Messenger: Communication Apps under Pressure.” Internet penetration in South Africa is 52 percent, while in Kenya it’s 46 percent.

The survey cites South Africa’s #FeesMustFall social media campaign as a case study of how social media can be effective in creating social change. Last year, students from the universities of Cape Town, Rhodes, and Witwatersrand used social media platforms such as Twitter to protest against fee increments by the government. This, coupled with street protests, led the government to halt its policy for this year. However, there will be a fee increment for university students in 2017.

Lehohla : “There is no doubt that Universities are under funded. Otherwise there would be no #FeesMustFall .”

Unsuccessful attempts to take down objectionable video content by the Kenya Film and Classification Board last year resulted in a slight decline in the country’s Internet freedom rating. Besides this hitch, Kenya’s Internet freedom is the second best in Africa. No websites, social media platforms or communication apps are blocked in Kenya.

The International Telecommunication Union also states that Kenya is one of the most wired  countries in sub-Saharan Africa.

The Freedom House survey states that the government’s investment in its information communication technology (ICT)  infrastructure is commendable, as the country serves as a gateway for other countries. Kenya’s broadband speed is 7.2 megabits per second (mbps), 0.9 points higher than the global average of 6.3 mbps. 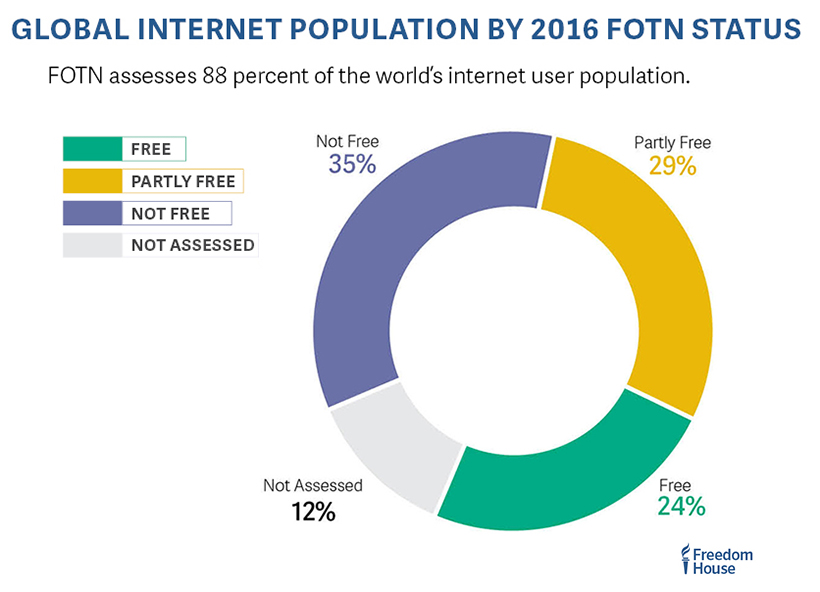 Nigeria was rated as having partial Internet freedom due to its arrests of “netizens,” such as bloggers and ICT users who criticized President Jonathan Goodluck’s administration.

However, the digital activism shown by bloggers in Africa’s biggest economy is admirable.

According to the survey, Nigerians successfully lobbied against the 2015 Frivolous Prohibition Bill, which sought to curb hate speech through text messages, social media apps, and platforms such as WhatsApp, BlackBerry Messenger, and Facebook, which forced the government to withdraw the Bill.

Uganda is one of 34 countries worldwide whose Internet freedom has gotten worse since June last year. In the lead up to the general election in 2015 and during the inauguration of President Yoweri  Museveni, the government blocked social media sites, including Facebook, Twitter, and WhatsApp. 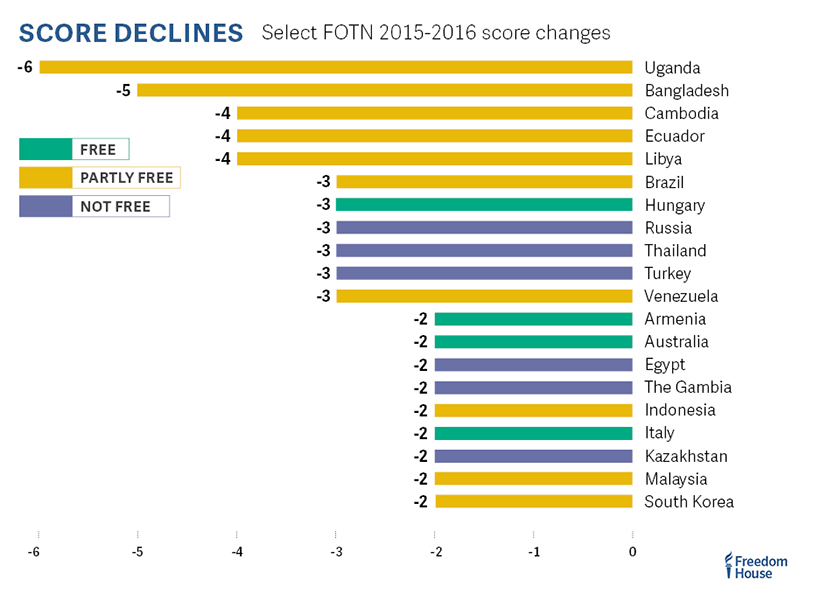 According to the survey, Internet freedom no longer exists in Ethiopia, after registering a score of 83 out of 100. The country’s  online penetration levels is only 12 percent and it recently blocked access to the Internet following months of clashes between the police and the Oromo and Amhara ethnic communities.

Between June 2014 and May 2015, its government has imposed flouting terrorism laws onto human rights bloggers and online journalists.

A country’s level of Internet and digital media freedom is measured on the Freedom on the Net Index, which has a maximum score of 100.

There are three main questions that each country is asked including what are their obstacles to Internet access, limits on media content, and violation of user rights, such as cyber attacks and hate speech.