A Catholic priest was shot and a bus burned during violent clashes between South African police and university students on Monday in Johannesburg, South Africa, reports AfricaNews.com.

Father Graham Pugin of Braamfontein Holy Trinity Catholic Church in Johannesburg was injured by suspected rubber bullets that were shot by riot police when he tried to protect the church’s gates in the middle of the violence.

In the video, Father Pugin — dressed in white — is seen bleeding as he is being led by some student leaders back on to church premises close to the Witswatersrand University campus.

“#Fees2017 pics from the Wits media group… A priest’s been injured & a bus has been set on fire” reads the tweet of Matshidiso Madia. 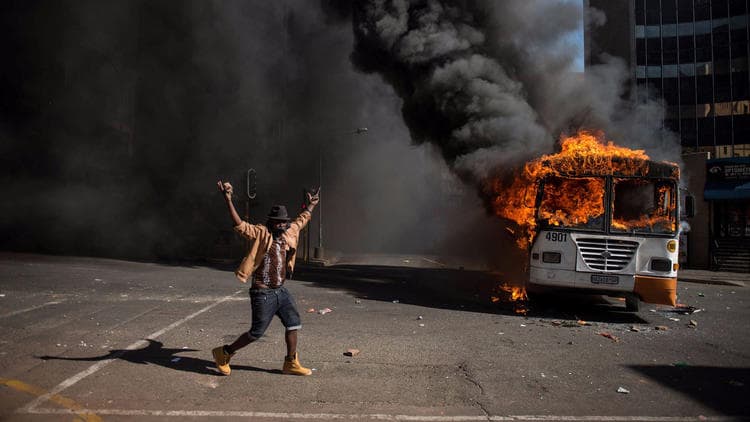 Police fired tear gas, stun grenades, and water cannons to disperse students after they pelted stones and then set a bus on fire.

Acting National Police Commissioner Lieutenant General Khomotso Phahlane addressed the media on Monday afternoon, saying it is too early to call a state of emergency after the violence, “[The police will] continue to display maximum restraint in the face of severe provocation…after criminality, intimidation, and attacks on police have taken place at some varsities.”

Phahlane also announced the arrest of 20 students at the University of Free State as well as the disruption of classes and the flooding of university premises by Rhodes University students in the morning.

“This type of behavior can never be condoned by any law-abiding person and is to be roundly condemned. We’ll do our best to ensure that there’s no irresponsible conduct on our side. We are going to work hard to ensure that we protect lives and property,” Phahlane added.

Protests marred the re-opening of Witswatersrand University, which was closed due to demonstrations sparked by a government proposal to raise university tuition fees by up to 8 percent in 2017.

The university protests have spread to Twitter under the hashtags #Fees2017 and #FeesMustFall.