In Uganda, there are certain types of clothes that public servants are forbidden to wear and any one flouting these regulations risks losing their job.

Since the rules came into effect in July, many Ugandans have assumed that the government was joking. But on Thursday last week, a Ugandan female court official was suspended from work for dressing indecently.

Rosemary Namuwanga, a court clerk and interpreter at Kasangati Grade One Magistrates’ Court, was suspended for two weeks for what the Secretary to the Judiciary Josephine Muwonge said was tarnishing the good image of the Judiciary and the entire Public Service.

“You were dressed in a very short and tight dress which by description does not fall within the generally acceptable standards of the Establishment Notice No. 1 of 2017,” Muwonge wrote in the suspension letter. 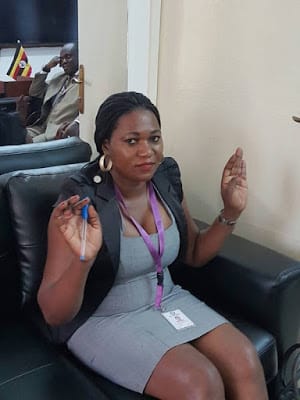 Rosemary Namuwanga in the dress that got her suspended. Photo credit: AsbGist Nigeria

The bizarre incident has sparked a nationwide debate about the recommended dress code for public servants in Uganda.

https://t.co/H9Iv4rVZ9r Ugandan Court Official has being disciplined for indecent dressing: A Ugandan… https://t.co/TU0C3C5RIr

what is this supposed to mean,excesses of power or simply abuse of office

Is this really a reason to suspend someone? This is discrimination of the highest order

It has also emerged that the court clerk was suspended after she complained about her delayed wages for July.

But in a quick rejoinder, a judiciary spokesman identified as Solomon Muyita has refuted these claims saying the court official had been summoned by the judicial secretary because her salary had already been paid.

Muyita added that Ms. Namuwanga was confrontational when she was questioned about her mode of dressing, leading to her suspension.

According to the new guidelines, female civil servants in Uganda are required to wear skirts that are below the knees and should not wear sleeveless, transparent blouses or dresses that reveal their cleavage.

Male employees on the other hand should wear neat suits and ties, and must never wear open shoes except for medical reasons nor tight trousers. Their shirts should remain tacked in all the time.

Many Ugandans have dismissed these rules as a blatant violation of fundamental rights and freedoms, but the Ugandan government maintains that the rules are supposed to instill and preserve good morals in the society.