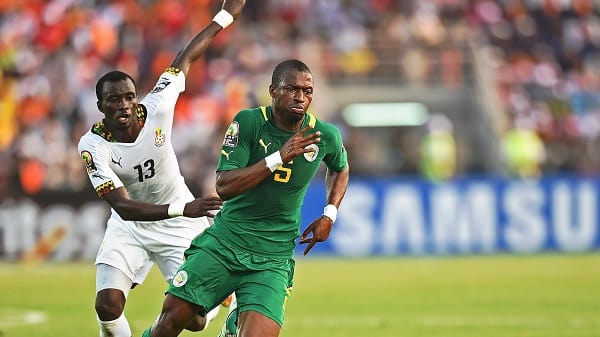 Senegal opened their Group C African Cup of Nations bout against Ghana with a dramatic comeback in a 2-1 win.

Marseille and Ghana’s captain for the day Andre “Dede” Ayew  put Ghana ahead with a penalty in the 14th-minute, after Chelsea’s Everton on-loan winger Christian Atsu was fouled by Bouna Coundoul.

For a great time period in the first half, Ghana enjoyed most of the ball possession in the match-up.

Senegal, however, came back strong in the second half: Stokes striker Mame Diouf (pictured in green) got his own rebound in to the goal past Ghana’s keeper Brimah Razak to get Senegal leveled.

Diouf continued to threaten the Ghanaian defense as he missed a glorious chance to take the lead.

Ghana had hoped to regain the lead through a free-kick from Andre Ayew, but his attempt went over the bar, summarizing Ghana’s poor showing in the second half.

In the 93-minute, Senegal stunned the Ghanaian defense as Mousa Sow buried in a low shot goal at the end of proceedings. 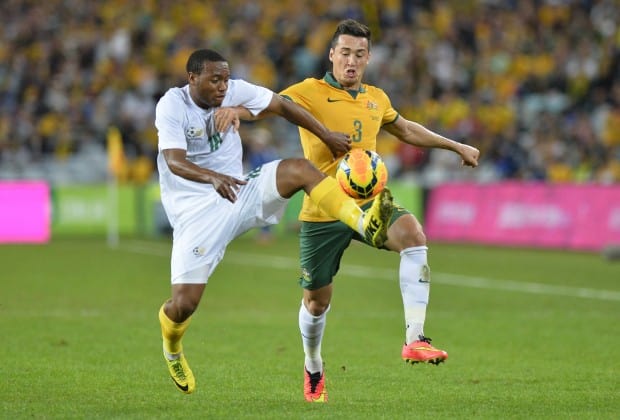 Favorites Algeria came from behind and got the biggest win of the tournament so far against a very determined South African side.

South Africa had dominated the first half and missed several chances to cause an upset in this Group C opener.

South Africa continued to impress early in to the second half, when they got a 51st-minute lead through Thuso Phala (pictured) finishing an amazing build-up.

Three minutes later, South Africa could have made things a little more difficult for the Desert Foxes of Algeria, but Tokelo Rantie missed the chance to double the lead through an awarded penalty.

In the 82nd minute, Slimani’s shot from the edge of the area slipped through South Africa’s keeper Keet‘s hands and rolled over the line for a well-deserved victory.