In the 21st century, a hotel in Kenya has denied a couple a room demanding they provide proof of marriage. The couple was none other than a member of parliament Catherine Waruguru and her husband, Kiprotich Kiget, who is a lawyer.

The Sunshine Hotel in the town of Kericho, 263 km from Nairobi, barred the popular couple from sleeping in the hotel after a visit to their rural home. Local media reported that the hotel did not budge even after the attempted intervention of three local MPs.

They had already paid for the room before arriving Saturday night but the hotel denied them entry and refunded their money.

The hotel’s management told the Daily Nation that the hotel had made it clear and posted on its reception wall that sharing a room with a woman required a marriage certificate. 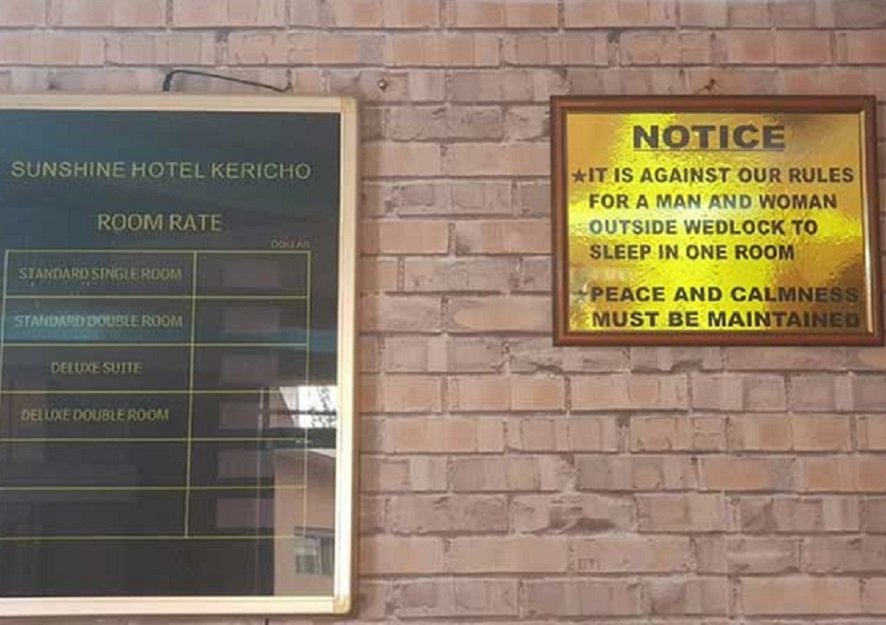 A notice at Sunshine Hotel in Kericho. On July 14, 2018 the hotel’s management declined to allow Laikipia Woman Rep Catherine Waruguru and her husband to share a room demanding they produce a marriage certificate. PHOTO | ANITA CHEPKOECH | NATION MEDIA GROUP

“I feel I have been embarrassed as a leader. I have sought reasons and justifications from the management but nobody has answered my question. I have been here for one and a half hours … I have seen about 10 couples walk in and out without being asked for a marriage certificate,” Waruguru said.

“We will not allow any more married women and men to suffer embarrassment in the hands of hospitality industry players who feel that it’s not about being able to afford the room but about a marriage certificate,” the legislator added.

MP Nelson Koech, who also tried to intervene on behalf of his colleague, expressed disgust at the hotel’s refusal to resolve the issue.

“My colleague Hon Sylvanus Maritim (Ainamoi MP) and I called the manager but they flatly refused to help. The nonsense of (demanding for a) marriage certificate is discriminatory, backward and totally unacceptable,” he told the Daily Nation.