Over three decades ago, on August 27, 1974, officers at the Beaufort County Jail in Washington, North Carolina, United States, at around 4.00 am, discovered the body of guard Clarence Alligood in a cell.

The guard had been stabbed 11 times with an ice pick and was naked from the waist down with semen on his left leg.

The occupant of the cell, a 20-year-old African-American woman, Joan Little, who had been serving a seven-year sentence for robbery was nowhere to be found.

She had escaped but would later surrender to the authorities and become the first woman to be acquitted of the murder of a white officer after using a self-defence plea, as well as, the support of many black men and women whose words and donations mounted a strong defence for her.

Born in 1953 in Washington, N.C., a small coastal town, Little was one of 10 children who would later turn truant and would turn a deaf ear to her mother who had a strict religious background.

Little run away from home to Philadelphia, where she graduated from high school. Upon her return to North Carolina, she entered into crime.

Alongside her brother, Jerome, Little between 1973 and 1974, burglarized several homes in Beaufort County.

She was later arrested and found guilty by a jury trial in June 1974 and ordered to serve seven to 10 years in Women’s Prison in Raleigh.

But Little chose to stay in Beaufort County Jail to enable her to raise bond and appeal her conviction.

Little, at just 5-foot-3 and 120 pounds, was said to be smaller than the male prison guards and was serving a sentence in a county jail that was often loose in terms of security.

Prison guards reportedly sexually harassed female prisoners with the promise of helping them to attain their freedom.

And that was what prison guard, Alligood had perhaps gone to do in Little’s cell after about her two-month stay in the Beaufort County Jail. 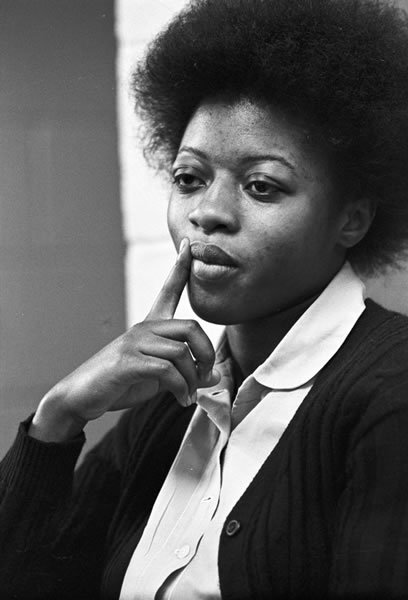 Little would later recount how Alligood, a married man for over four decades, had entered her cell one evening and allegedly tried to assault her.

“He started to take off his shoes outside the corridor … he started in towards the cell and I backed off to the back wall… he just started taking off his pants … I told him no, I wasn’t going to do nothing like that… he tried to force me towards him … that’s when I noticed that he had a ice pick in his hand,” said Little during a five-week trial of the case.

In the midst of a scuffle, Alligood, who stood 6 feet tall and weighed 200 pounds, was stabbed 11 times by Little with the ice pick, a common tool used by guards for odd jobs around the jail.

“No stranger to the stereotypes about black women, Joan Little knew how the scene would look. Some would label her as a Jezebel and claim she was “asking for it.” Others would suggest that no respectable woman would have been in jail, or in this position, in the first place,” according to an article by Ashley Farmer on aaihs.org.

Little later surrendered to authorities with the help of local attorney Jerry Paul, after being declared a murderer and a fugitive. 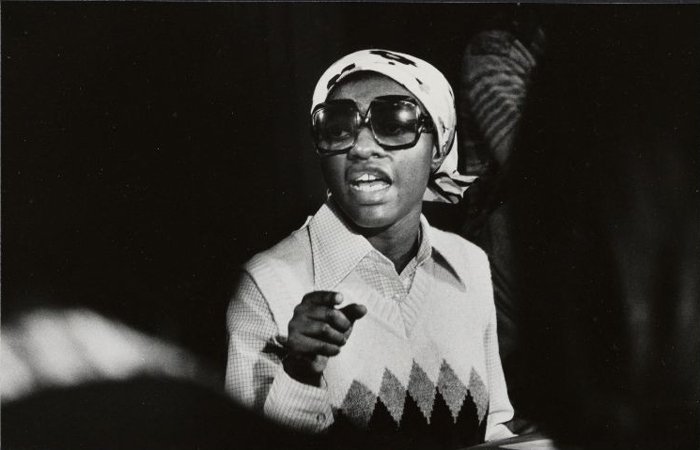 Charged with murder after her arrest on September 7, Little was moved to the Women’s Prison in Raleigh out of fear of retaliation and the need for a fair trial.

In North Carolina at the time, first-degree murder charges also carried the high threat of the death penalty. If convicted, Little would have died in the state’s gas chamber.

But by the time the case had gone public, Little had become a global celebrity, attracting scores of civil rights activists, feminists, and other notable black leaders who would help raise $350,000 through a “Joan Little Defense Fund” created for her by Paul and Southern Poverty Law Center general counsel Morris Dees. 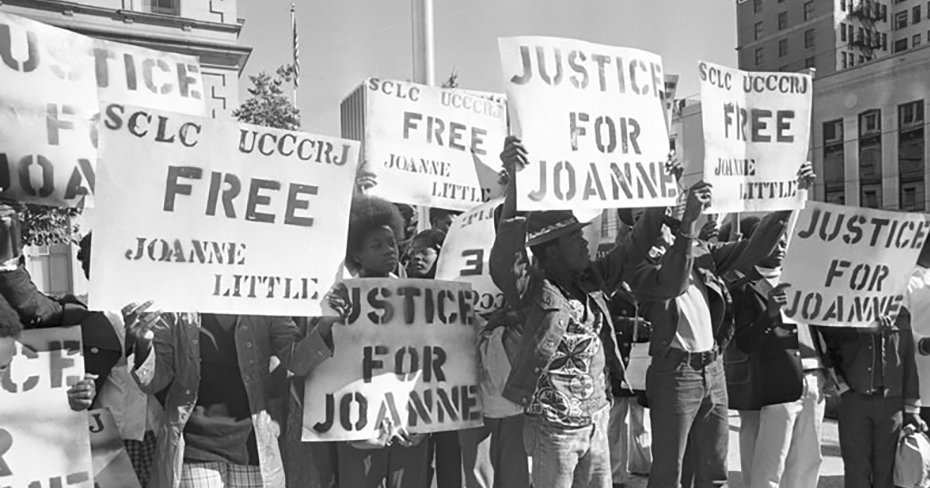 Protesters calling for the release of Joan Little — BlackMattersUS.com

Little used the money to post bail, and she was released pretrial on February 27, 1975.

Meanwhile, the local attorney, Paul, assembled a team of attorneys and social scientists to build their defence while requesting that the trial is held at Raleigh in demand of a fair trial.

During the five-week trial, which was described by the media as the “trial of the decade”, the “Free Joan Little” movement was formed, where activists such as Angela Davis, Ralph Abernathy, Rosa Parks, and Bernice Johnson Reagon launched a massive support for her.

On the final day of the trial, the jury handed down an acquittal after just 78 minutes of deliberation. 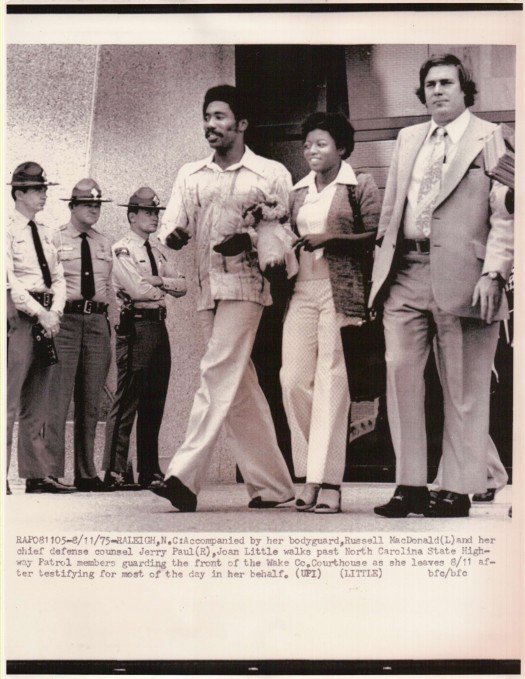 Earlier at the commencement of the case, prosecutor William Griffin argued that Little had deliberately instigated the incident.

He stressed that Little had seduced Alligood, then killed him when she realized her chance to escape.

But Alligood’s other black female victims, including Ida Mae Roberson and Phyllis Ann Moore, testified to his history of sexual assault.

Their testimonies, coupled with Little’s, got the jury to her side, who found her not guilty.

One of the jurors, when the verdict was in, commented, “I thought about it … and I decided that these people [the prosecution] hadn’t shown me anything to convict her.” 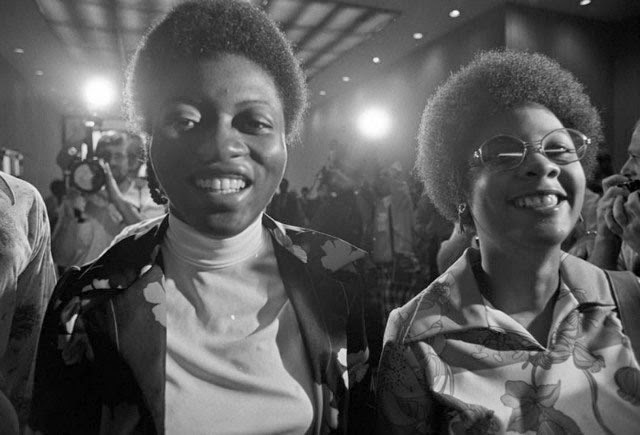 After she was acquitted, Little returned to prison to finish her seven-year robbery sentence and in the meantime served as a symbol for many groups including the Black Panther party.

However, her past did not leave her as she escaped from jail again on October 15, 1977, but she was recaptured and completed her term.

In 1989, Little resurfaced when she spent a night in jail on stolen property charges that were later dropped.

Though she left the public scene afterwards, her case brought to the fore sexual abuse of women in many oppressive systems such as the prison.

Her trial, which gained worldwide attention due to its mix of race, sex, gender and massive support, was also one of the first in which “scientific” jury selection was used by defence lawyers to try to come out with a favourable outcome.

Her “Free Joan Little” movement also demonstrated how building a massive support for such women can address issues such as racism, sexism, police brutality, and a biased judicial and correctional system, among others.