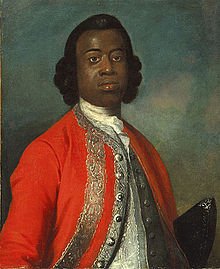 He was a prominent 18th-century Ghanaian, best known for his wrongful enslavement in the West Indies and diplomatic mission to England. He was both prominent among the Fante people and influential among Europeans concerned with the transatlantic slave trade.

His father was John Correntee, chief caboceer and head of the Annamaboe (present day Anomabo) government who was a slave trader and an important ally for any trader in the city. His father sent him to England to gain an education and be his eyes and ears in Europe.

The ship captain entrusted with Ansah’s transport sold him into slavery in Barbados before reaching England. He was discovered in Barbados years later by a free Fante trader who alerted John Corrente. Corrente petitioned the British to free his son. The Royal African Company, the English company operating the slave trade freed him and transported him to England.

He was received as a prince in England and gained the respect of London’s high society. It is noted that he watched a live performance of a play depicting a wrongly enslaved African prince. He fled the theatre in tears to the surprise of the audience. The play likely reminded Ansah of himself.


He returned to Annamaboe and took up work as a writer at Cape Coast Castle. He later worked as a slave trader.