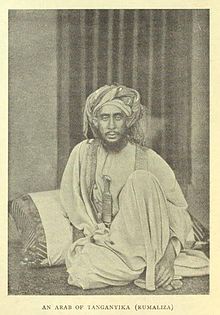 Named Muhammad bin Khalfan bin Khamis al-Barwani, Rumaliza was a Swahili[a] slave and ivory trader in East Africa in the last part of the nineteenth century. With the help of Tippu Tip he became Sultan of Ujiji. At one time he dominated the trade of Tanganyika.

Stories associated Rumaliza and his parties with the kidnapping of women, cutting off men’s genitals (to be captured and sold as eunuch slaves), cutting off legs, arms and hands, piercing of noses and ears, burning villages and killings. Belgian forces under Francis Dhanis launched a campaign against slave dealers in 1892, and Rumaliza was targeted until he fled.