Africa produces tons of electronic waste every day. Made up of spoilt computers and photocopiers, TV sets and other electronic gadgets, these waste products are often burned, releasing hazardous gases into the atmosphere which are harmful to health. But thanks to the activities of some young men in Africa, these things discarded as waste are being put to good use.

KLAKS 3D, a computer company in Kumasi in Ghana has since 2016 been using e-waste collected to build machines for printing items in three-dimension. The inventors are products of the Kwame Nkrumah University of Science and Technology (KNUST) as well as University of Mines and Technology (UMAT).

The five inventors, who are in their 20s, used two weeks to build the first device after collecting e-waste items like square-pipes, motors from spoilt printers and photocopiers, bike tubes, screws, rots as well as land cables from the Agbogbloshie market in Accra.

Sharing more details about the motivation to come out with the device, the leader of the group, Kobina Abakah-Paintsil said: “…since we also like practical things we got fed up from always having to imagine things our lecturers have been saying and teaching.”

“3D printing was an avenue for us to explore in the sense that we could actually make whatever we needed in the physical realm for us to see,” he told local media Joy News.

There are many 3D printers on the market, but since this one is made from local materials and electronic waste, it is “a little bit cost-effective”, Kobina said. 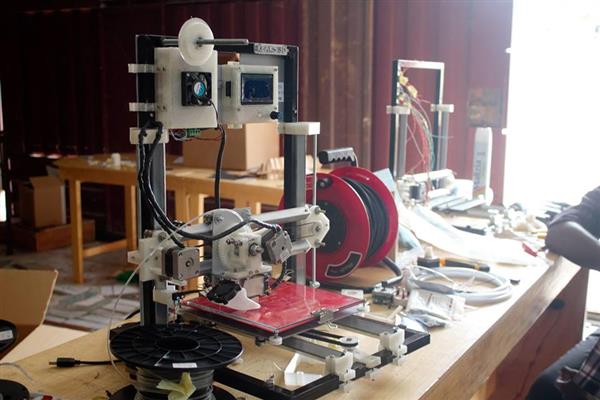 3D printing has over the years been gaining grounds in Africa. In 2013, WoeLab, a community tech hub in Togo made the first Made in Africa 3D printer from e-waste. Since then, there have been calls for more of such innovations to grow the economies of countries on the continent. Buni hub, a tech centre building 3D printers in Tanzania followed suit in 2016.

In Ghana, KLAKS 3D said its initiative is to put an end to the practice whereby people go to industry to make something small at a very high cost which actually could just be printed, using the normal ink-jet printer.

KLAKS 3D is made up of Kobina Abakah-Paintsil, Emmanuel Kweku Mensah and Loic Avegnon (from UMAT) and Ama Agyapongmaa Amponsah and Isaac Nyankum (from KNUST).

The group has already sold one of the printers to a non-governmental organisation, and there has since been an increased demand for their device.

It has since 2016 been posting progress updates through its Facebook page. Below is a video of some of the works of KLAKS 3D: