John Arthur Johnson, nicknamed the Galveston Giant, was one of America’s greatest boxers and the first black heavyweight boxing champion after he defeated Tommy Burns in Sydney, Australia, in 1908.

He was also a man who liked going against society dictates on how he, as a black man in a white world, should live his life. Not only did he live a flashy life he also married white. Three times.

In 1913, he was convicted of taking a white woman across state lines, a violation of the Mann Act.

The Mann Act, also known as the White Slave Traffic Act, is a statute that dealt with child pornography and prostitution. It was also used to prosecute black men for transporting white women across states.

Johnson was convicted because of his relationship with his white wife, which was seen to be against nature. An all-white jury took less than two hours to convict him of the crime, thus derailing his career and ruining his reputation. 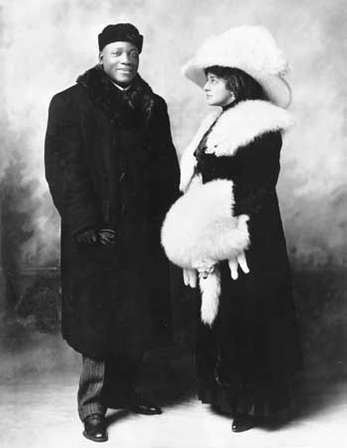 Before serving his sentence, he fled to Europe where he was a fugitive for seven years. After defending his championship three times in Paris, he agreed to fight Jess Willard in Havana Cuba. According to observers, he deliberately lost to Willard with the hope that charges against him would be dropped.

He surrendered in 1920 and served his sentence.

Aside from Johnson, architect Frank Lloyd Wright, actor Charlie Chaplin, and rock and roll singer Chuck Berry were also charged using this law. However, only Berry was convicted of a Mann Act violation in 1962.

In 2005, a letter was sent to President George Bush, requesting the posthumous pardon for Jackson but it failed to pass in the Senate.

The matter is yet again in the White House after President Donald Trump stated that he is considering the pardon.

Sylvester Stallone called me with the story of heavyweight boxing champion Jack Johnson. His trials and tribulations were great, his life complex and controversial. Others have looked at this over the years, most thought it would be done, but yes, I am considering a Full Pardon!

Johnson’s contribution to civil rights and popular culture was immense. He was the subject of the movie The Great White Hope starring James Earl Jones and the documentary “Unforgivable Blackness: The Rise and Fall of Jack Johnson.” He has also been featured in songs and other productions.