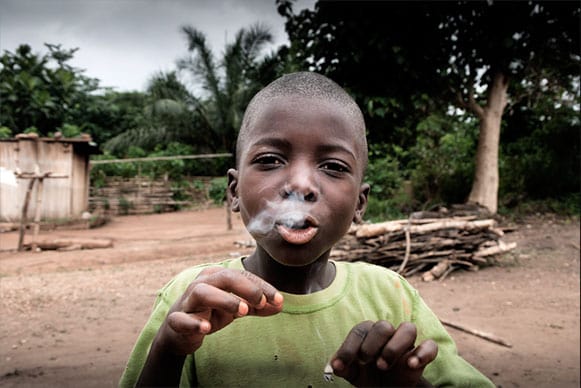 Uganda is currently battling a public health crisis by way of a law that would ban smoking in the country, which kills 13,500 people each year. However, a British tobacco giant British American Tobacco (BAT) has been accused of blackmail in order to disrupt an anti-smoking law by a member of the Ugandan Parliament.

upend Dr. Chris Baryomunsi’s (pictured) private member’s bill that would seek to eliminate smoking, because supporters of Baryomunsi’s bill and other anti-tobacco supporters see the bill’s possible passing as a significant blow to the profitable industry, reports the Guardian.

According to Enó Isong, associate director, International Communications Campaign for Tobacco-Free Kids, European tobacco firms are aiming their efforts in Africa as western countries have taken measures against their development.

More from the Guardian:

In a letter to Baryomunsi, BAT Uganda confirmed that it will no longer do business with the 709 farmers in his Kihihi constituency that it normally buys from because his bill – and a related plan to raise tobacco taxes – has rendered the arrangement “increasingly less economically viable.”

BAT, which has a stock market valuation of $65bn, buys tobacco from 18,000 farmers in Uganda and Baryomunsi said he was under no illusions about why the company had targeted the farmers in his district first.

“Although they said it was a business decision, the reason was merely blackmail,” Baryomunsi said. “They thought that the farmers would rise against me and disorganise me politically, but I told them I was not moved. I actually assured them that what mattered to me was not the number of years I spend in parliament but what I do when in parliament. I assured them that no amount of blackmail and intimidation would shake me.”

The anti-smoking law will mirror similar laws in the West, such as large health warnings covering 75 percent of the cigarette packaging, a ban smoking within 100 meters of public buildings, strike down advertising, and raise the smoking age from 18 to 21 among a handful of other measures.

Tobacco farmers in the nation, backed by lobbyists, have said the bill will have adverse effects on their business and are furious with the plans. BAT has also launched a lobbying effort warning Parliament members that altering the country’s current Tobacco Act will be detrimental to the income of thousands of tobacco workers.

BAT said in a letter related to its lobbying campaign that the smoking ban would disrupt the livelihood of 60,000 farmers in Uganda and threaten a viable revenue stream that benefits all.

In March, Senegal introduced an anti-smoking bill and MP Baryomunsi thinks this will be a trend across the continent.

“My bill is quite comprehensive and once passed will revolutionalise the fight against tobacco in Africa,” Baryomunsi said. “The bill has the support of Ugandans. It is only the [tobacco] industry that is spearheading this opposition voice.”