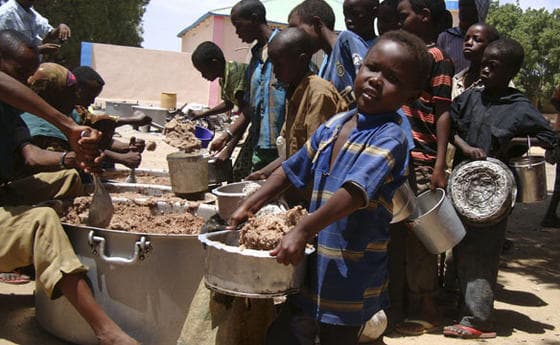 The United Nations stated last Friday that the six-month long famine in Somalia has ended but they also say that the situation remains serious. Nearly a third of the population, almost two and a half million people, remains food insecure. The region has been hit by the worst drought in sixty years because of its instability. They contribute the end of the famine to a good harvest and crucial humanitarian assistance.

"The gains are fragile and will be reversed without continued support," said Mark Bowden, the UN's humanitarian coordinator for Somalia. "Millions of people still need food, clean water, shelter and other assistance to survive and the situation is expected to deteriorate in May," he said. The situation is particularly precarious for an estimated 325,000 children who are acutely malnourished, the UN said. Although $1.3 billion worth of aid has been poured into the country, the scale of the suffering remains immense, says the BBC Africa analyst Martin Plaut.

Many Somalis fled rural areas controlled by the Islamist al-Shabab group as it has banned most Western aid agencies from operating in its territory. Recently, the al-Qaeda-linked militants expelled the International Committee of the Red Cross, one the few international groups still delivering food aid to areas under their control.

Somalia has not had a functioning central government for more than 20 years and has been racked by fighting between militias.