Somalia rebels have stopped the International Committee of the Red Cross from delivering aid to Somalia at a time when the country needs it most. Somalia has been suffering from a hard hitting drought, which has caused a severe famine in the country.

The Islamist revolutionary group claims that the Red Cross falsely accused them for bringing a halt to the dispersion of aid. 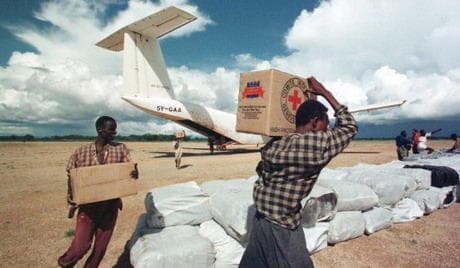 In spite of this, the Red Cross has still been supplying Somalia with emergency food. However, upon inspection of this food, the rebel group deemed more than half of the food provided by the International Committee of the Red Cross to be expired.

It has also been noted that the militant group known as Al-Shabab has been accused of such behavior in the past, where they discouraged aid from reaching the most famine-stricken places in Somalia like central and southern Somalia.

Unfortunately, Somalia has grown increasingly unsafe over time. With the occupancy of a revolutionary group as well as the natural disaster that has befallen their grounds it will be hard to secure aid to the people who need it most.

To help the victims of the drought in Somalia, please go to http://www.redcross.org. to donate or text FOOD to UNICEF—864233 to donate $10 and feed a child for ten days.