This article has been edited and was first published on May 25, 2016.

I felt the first one in January of 1994 when my plane landed in Kenya. It was a short but powerful shaking. Eight years later, in 2002, I felt the second. I was speaking at a Black History Month celebration in Tampa Bay, Fla. — that one really got my attention. But the real shaking happened in 2010, about two months after the great earthquake of Haiti.

The very foundation of my life was rearranged, but it set me on a new path to see more clearly the reality of the coming United Federation of African states.

I see the formation of the United Federation of African states much like a great earthquake that will shake the entire world. Let me explain. The rock plates of the Earth move about 2 to 12 cm every year. This movement causes stress between the brittle plates that are touching. Tremendous energy is built up at these stress points or

The rock plates of the Earth move about 2 to 12 cm every year. This movement causes stress between the brittle plates that are touching. Tremendous energy is built up at these stress points or vault lines. When the stress exceeds the strength of the plates, the plates break. The energy released causes the earth to lurch and shake with tremendous force. This splitting and shaking of the earth is called an “earthquake.” Minor earthquakes happen all the time. Most of them are barely felt.

Much like an earthquake, the idea of a unified Africa has been causing rumblings for centuries.

Prior to the 19th Century, African life could be described as self-supporting, self-governing and fairly self-sufficient. Then came the “Great Divide,” the splitting, tearing and ripping of Africa by Europeans. This action was codified into the political partitioning of Africa at the Berlin Conference, “scramble for Africa,” of 1884 – 85. 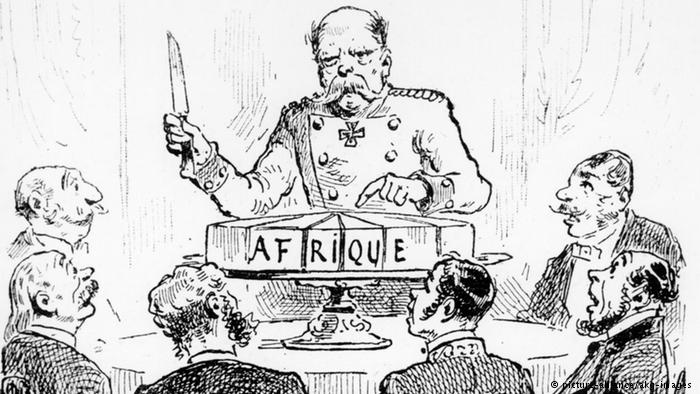 A depiction of the “Scramble for Africa” Conference in Berlin, 1885, where  European leaders met to divide Africa up for distribution amongst themselves.

From that point, things began to slowly shift – and much too slowly for most of us. The images of rape, torture and thievery caused by colonization and the enslavement of African peoples in the 19th and 20th century seemed unbearable. Even today, the mere thought of those days can cause rage and murderous thoughts to grip the African emotion. There were isolated rumblings throughout Africa; cries of freedom were heard everywhere.

Then there came a different noise, a low-sounding rumble almost indistinguishable from the shouts of national freedom: It was a call for African unity.

Others, like George Padmore and W.E.B Dubois, moved back to Africa. Outside of Africa, these children of the black slave diaspora, who were devoid of a strong national identity, were able to envision an all-Africa or Pan-Africa.

Continue reading article on next page: