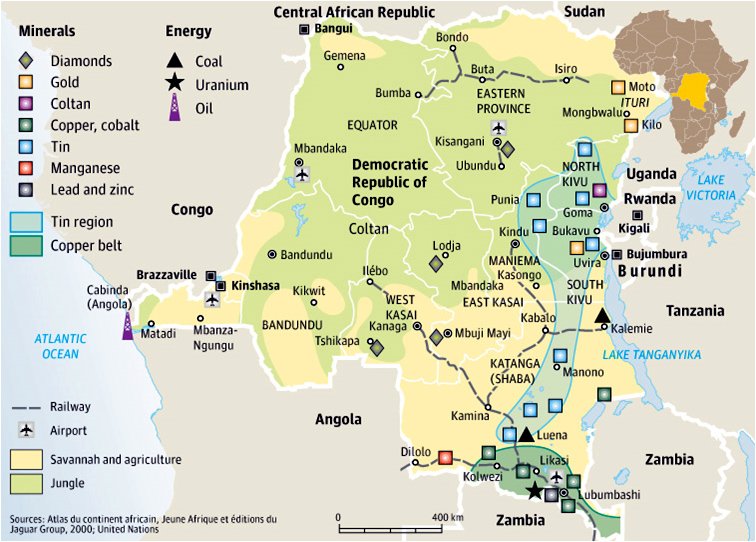 Finally, I could not write about visiting Africa in relation to Black Panther and not mention the DRC, the true Wakanda, as it is the source of the world’s ‘vibranium’.

The DRC powers the world. As I wrote recently,

Congo’s mines produce nearly half of the world’s supply of tantalum, [as well as a large percentage of its tin ore, tungsten, gold, and dozens of other minerals used in electronics]. Tantalum is the rare, blue-grey metal that conducts electricity through the smart devices we are all addicted to. Thanks to skyrocketing demand from electronics makers, tantalum—along with a handful of other rare minerals—is an incredibly sought-after metal. The same for cobalt, a component in the lithium-ion batteries used to power electric cars and mobile phones, for which the DRC produces about two-thirds of global output.

But, rather than yield the tremendous power that Wakanda commands in the world, all indicators suggest that the DRC is the poorest country in the world. The presence of the country’s tremendous natural resources is fueling violence, hunger, and disease, rather than aiding in its supreme reign over the world.

And for many reasons: unlike Wakanda, the DRC is the second largest country in Africa by size and the fourth by population. It has one of the most gruesome and brutal tales of colonization the world has ever seen – ever heard of King Leopold, the “Hitler” of Africa? The country is consistently full of multinationals who continue to scramble for the country’s wealth and has been in the international media for decades over the issue of conflict minerals.

It is important to note that not all parts of the DRC are safe to visit, with the U.S. Embassy issuing a travel warning for the country due to armed conflict in certain areas. Some say that certain areas are safe, promising a true African adventure in its lush rainforest, gushing rivers, and smoking volcanoes. Put the DRC on your list still, for a future visit – the country truly reminds us of the threats and consequences of a real Wakanda.