For years, politics to me has been an arena filled with men while their wives are used as political tools during campaigns to obtain sympathy from voters. Male presidents are continuously running the political arena in greater numbers, while the office of the first ladies cannot directly intervene in the running of the country despite their closeness to power. It is for this reason that when we see the magnetic force of a first lady, especially an African American woman who is captivating a whole nation such as the United States of America and restoring the confidence of its people, the world takes notice. 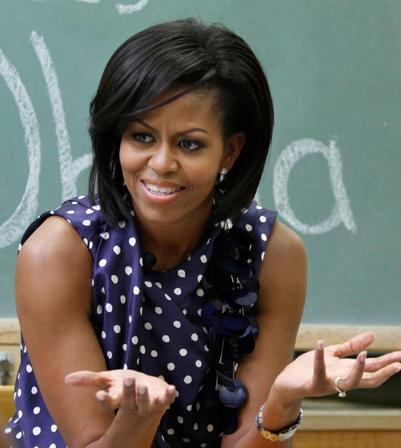 On the first night of the Democratic National Convention a couple of weeks ago, golden first lady Michelle Obama gave a rousing speech in which she gave a heartfelt honor to her husband, advocating safe causes like helping military families and ending childhood obesity. Without ever saying a word about race or political parties in her speech, she spent some time speaking to the 1% who are suspicious of her husband’s policies, but illustrated she preferred hanging out with the 99%, the hardworking middle class. She reminded them of how she and the president’s humble origins have inspired his policies during his presidency.

As a young black woman, I was extremely proud. Michelle Obama, as political commentator Sophia A. Nelson mentions, “has changed the game for women of color.” As the first African-American woman to carry the role of first lady of the United States, she has redefined what is possible for millions of black women and girls in America. A strong, beautiful "sistuh" born and raised in Chicago's black South Side, Michelle Obama has it all. As a significant political figure in her own right, she models what it truly means to lead with integrity. She embraces loyalty while showing compassion to all her fellow men and women. Most importantly, she is supportive of her husband's vision for the country and plays an instrumental role in president Obama's leadership.

On the other hand, as a young African woman residing in the Diaspora, I felt excruciatingly embarrassed, questioning: “Where are the first ladies of Africa?!

Over the years, I’ve seen numerous African presidents in the spotlight, but rarely have I seen the light shine continuously on the roles of their wives as first ladies in the wider social and political arena. Not even a brief glance. With the proximity to power and the authority of government office, one would think Africa's first ladies at least do get down to the grassroots, observe and understand the needs of the masses; assist the vulnerable and forsaken, and also intervene in the social life of the people.

Quite the reverse, what we’ve seen are the numerous beaming photos of their latest fashion escapades and trendy wigs while majority of the continent plunders in deep poverty. 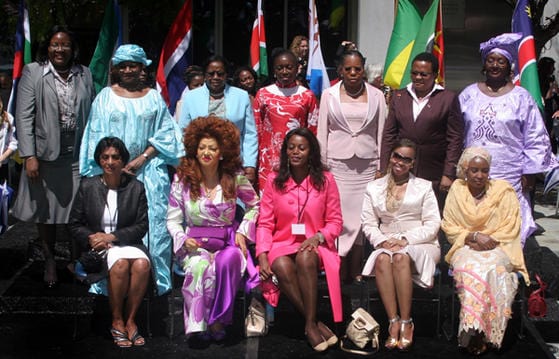 Over the years, I’ve heard many people complain about the activities of foreign countries in Africa. Yet today, people on the continent are suffering not because of what other nations are doing but mainly because of what we as African leaders, presidents, and first ladies don’t do.

Africa, the world's second-largest continent is overwhelmingly rich with natural resources, rich in cultural diversity, creative skills, historical/artistic roots, and blessed with striking beauty to the full spectrum of skin tones and hair textures. And yet it is where it is today not because of those who do malicious activities within the continent, but because of those who look on and do nothing.

“Such are Africa's politicians," one may say. This is such an idle decade-old statement we should no longer accept. Nor should we accept gender, cultural/tribal differences or sexism as reasons not to act. Africa belongs to us, and it is our responsibility to change it!

With the little they had, our great-grandmothers and great-grandfathers have watered the soil of the continent with their sweat, tears and blood; they’ve marched, were arrested, and suffered unbearable beatings heroically on the streets and in prisons just to redeem their dignity and identity during apartheid in South Africa.

Everyday young girls and boys tirelessly walk those dusty red roads at the back of their villages to attend school, and sometimes travel long distance without shoes to persistently ensure their right to education. Young girls as early as 10 years old subdue to forced marriages moan all day as patients in hospitals, due to lack of drugs necessary to ease the growing HIV/Aids epidemic. Children as young as five, traumatized, hopped on drugs, and carrying AK-47s becoming soldiers of choice, swallowed by the very wars they are forced to wage. As if the former is not enough, most women although are the salvation of Africa work so hard for so little and make up the majority of Africans who live in poverty.

Tell me, in the face of such many seemingly senseless humanitarian tragedies, where are you First Ladies of Africa?! Where is your capacity for moral outrage?!  Where is this struggle to restore hope to find at least some measure of peace, and reconciliation? How does one become a bystander to the agony of their own people while sitting at the seats of power?! I Omoy do often wonder what it looks like through your eyes as First Ladies to actually see, hear someone endure hell in your own backyard and yet ignore their cries for help. I really struggle to imagine this.

As women and as First Ladies we have the enormous power in our hands to make our husbands, our presidents do the right thing and govern appropriately. We can certainly steer them in the right direction. In some traditional African societies for instance, women have exercised the most effective sanction against misrule. According to Chinweizu author of Anatomy of Female Power; when a king became “intolerable to his subjects, a procession of grandmothers will march naked to his palace. No ruler ever survived this final and dramatic repudiation by their mothers. On the contrary, the threat of this march was enough to bring erring and dictatorial rulers to heel."

Perhaps this act may be too risky for some of us, but again it shows the enormous power women have. But we must first be proactive! As First Ladies we must be intentional about initiating and providing intelligent and wise changes to our presidents instead of merely being silent to the atrocities taking place in our perspective countries.

It means setting goals, praying about it, and then researching options. But more importantly, we need to ACT on those plans to see it come to fruition, and not once give in or give up on ourselves, on our husbands or our people even if the future appears blurry or if circumstances are beyond our control. Like our foremothers and forefather, we owe this much dedication and sacrifice to the generation to come, and I believe that African women can help shape Africa's poltics much like how Michelle Obama has helped shaped president Obama's presidency.