Stacey Abrams, 44, just won the Democratic nomination for the state of Georgia.

Abrams is a lawyer – Yale class of ‘99 -, writer under the pen name Selena Montgomery,  business consultant and cofounder of a beverage company that focuses on infants and toddlers. She told Glamour last month that she quit her company, however, to focus on her campaigns.

When you see someone running full-time for office, someone has to pay for their mortgage and their insurance. I’m a single woman. I don’t have a spouse who is supporting me. I do not have current employment. I wrote a book and luckily that income has supported my campaign. But I had to resign from my company. I resigned from the legislature. I haven’t had a steady paycheck in quite a while. If you’re running for office, you’re literally forfeiting your income to run

According to BBC, Abrams was raised in Gulfport, Mississippi, as one of six children. She moved to Atlanta as a teenager where her parents, a college librarian and shipyard worker, both attended Emory University and studied divinity to become United Methodist ministers.

There, Abrams became the first African American female valedictorian of her high school. She then went to complete her undergraduate degree at Spelman College, a master’s degree from the University of Texas, and a law degree from Yale University. At the age of 19, she addressed the nation in this impassioned address about youth participation in governance.

In 2016, she gave an impassioned speech on economic inequality at the Democratic National Convention where she backed presidential nominee, Hilary Clinton. Abrams is considered a rising star among progressive Democrats. 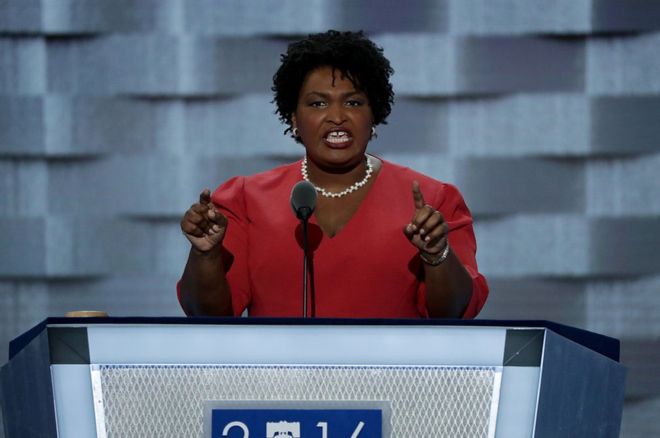 Getty Images – Ms Abrams at the 2016 Democratic convention, where Hillary Clinton was nominated

The role of the State Governor

Although many people know of the state governor’s role, many do not know its importance. In fact, the role of the governor is one of the most powerful seats in U.S. politics but the least talked about.

Governors serve as chief executive officers and commander-in-chief in each of the fifty states and five territories in the U.S. The elected official serves as both head of state and head of government in this role. He/she is responsible for implementing state laws and overseeing the operation of the state executive branch. As the state’s leader, the governor advances and pursues new and revised policies and programs using a variety of tools, among them executive orders, executive budgets, and legislative proposals and vetoes. The governor is supported and assisted by department and agency heads, many of whom he/she appoints to carry out their management and leadership responsibilities and objectives. – National Governors Association

What’s more? The governor’s seat has long been a stepping stone to the Presidency. Seventeen of the country’s 44 presidents have held the position, with 9 immediately serving as governors before becoming presidents. It is also important to note that according to U.S. Constitution, there are areas of authority that fall exclusively to the state governments. Governors, as heads of states, have power over these areas, such as the majority of criminal law and educational policy. The federal government may influence policy in these areas but authority lies within the state.

For a country that is rife with many social discontent, the powers the Governor’s seat affords Abrams will allow her to bring considerable changes to the state of Georgia.

I want to be the person who delivers for families like my own a way out of this. I want to be the governor who says: I’ve been where you are. I’ve grappled with these issues; I have a brother who has struggled with addiction and mental illness; I know what it’s like to not know if you can afford to be treated for cancer, because had to help my father pay for cancer treatments. I know what it means to not go to the dentist because you don’t know if you can afford the bill, and then it turns into something else. I’ve been down there myself. But what that means is that I know the way out.

Nonetheless, Abrams still has a long way to go. Republican U.S.President Donald Trump won the Florida vote in 2016. According to The New York Times, Abrams will need to energize the states 47% non-white voters to support her as the majority of the State’s white and rural demographic have abandoned the Democratic Party. Young and nonwhite Georgians who not reliably vote in non-presidential elections, some of whom have not registered at all, will need to show up in large numbers for Abrams to win. She will so need the support of white women to tip the scale in her favor.

But many are sure she can win.

When she does, she will make history: the first black female Governor in the U.S., circa 2018.