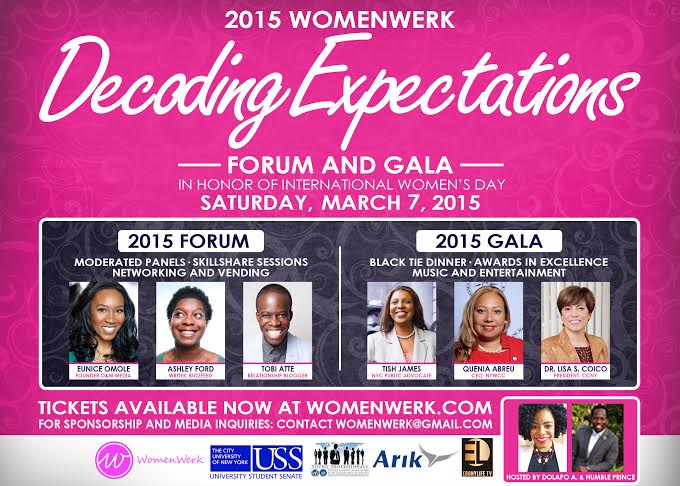 WomenWerk announces the 2015 WomenWerk Forum and Gala in honor of International Women’s Day (IWD) on Saturday, March 7th, in New York City. The 2015 theme is “Decoding Expectations” and will explore the societal expectations women navigate in the public and private space. WomenWerk’s annual Forum and Gala is a two-part annual celebration for women of all backgrounds. The event sold out in 2014 and hosted more than 300 guests from across the country.

The  2015 Forum features panel discussions, skillshare workshops, a networking lunch by career sector, and a raffle of 2 roundtrip airfare tickets to West Africa courtesy of Arik Air, the official airline of the 2015 WomenWerk Forum and Gala. Guests are women and men from mid-level to executive networks. Young women in high school and college will have a separate Youth Forum by invitation from their school.

The 2015 Forum begins with the “Crafting the Narrative of the Woman” panel. This panel explores the representation of women in news, media and the arts and features Ashley Ford, staff writer at Buzzfeed, MaameYaa Boafo of An African City, and Zeba Blay style contributor at the Huffington Post.

The Forum continues with the “Men’s Panel on Decoding Expectations.” This panel explores the gender expectations in the workplace, home and society at large and features Tobi Atte, Relationship Blogger at IJustMetMe, Cory Provost, District Leader of the 58th Assembly and Tope Esan, Founder of the Nigerian Entertainment Awards (NEA).

For more information, visit WomenWerk.com for the 2015 Agenda.

Following the panels, guests may attend one of several skillshare workshops. Workshops include: Launching Your E-Commerce Business by co-CEOS of CurlSistas, Obi Okere and Joy Adaeze Okere, Living Abroad: How to fund your dreams to work and study overseas  by Fulbright Scholar Regina Fuller, Get Your Work Published by author Nana Brew-Hammond, Do You: How to create your own dream job by Two Brown Girls podcast co-founder Fariha Hoisin and Winning Women: Taking ownership of your career  by career coach Jena Burgess and Business Development Vice President Ivy Kusinga.

WomenWerk draws over 200 guests annually to their Forum and Gala for an incredible day of conversation, celebration and connection. Past honorees include Freida Foster, Trustee of the City University of New York; Dr. Mehret Mandefro, producer of Golden Globe nominated film “Difret”; Dr. Ngozi Okonjo-Iweala, Finance Minister of Nigeria: and former U.S. President Bill Clinton and The Clinton Global Initiative.

Tickets for the Forum and Gala are available at:WomenWerk.com. No tickets will be sold at the door.

WomenWerk provides a platform for women and women to affirm and celebrate individual and collective success. Sponsors for the WomenWerk 2015 Forum and Gala are CUNY USS, UNA-YP, Dining with Grace, Statuesque Events, RockNaija TV,  EbonyLife Television, and Arik Air. For media press passes to the Forum and/or VIP Reception visithere. For all other media inquiries, email WomenWerk@gmail.com.