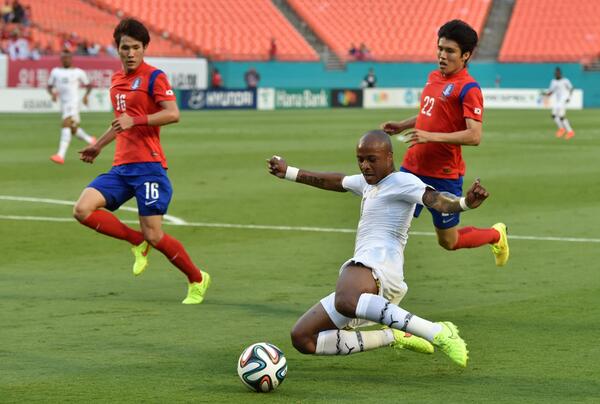 Ghana won their final friendly ahead of the World Cup with an emphatic 4-0 win over South Korea in Miami on Monday.

Coming from a relative poor showing in their European camp friendly with the Netherlands, where Ghana lost by 1-0 goal, Ghana’s coach, Kwesi Appiah, gave a strong indication of how Ghana will be playing in Brazil with a starting lineup that had as many as 10 changes from their previous friendly match.

Substitute Jordan Ayew capped the night with his first international hat trick, with goals coming in from the 11th, 53rd. and 89thminute.

Upfront Captain Asamoah Gyan, who was the score sheet for the 40th time in a Ghanaian jersey, partnered with Majeed Waris.

Although South Korea fielded a similarly strong squad, which had 59 percent of the ball possession in the game, they were unable to penetrate the Ghana Black Star defense.

Ghana exuded confidence throughout the entire encounter and may have calmed a  nervous fan base that has been repeatedly worried about the current defense line.

Ghana will open their World Cup campaign in Brazil on June 16th against the United States and will also face Germany and Portugal in Group C.

Watch part of the Ghana vs. South Korea match here: