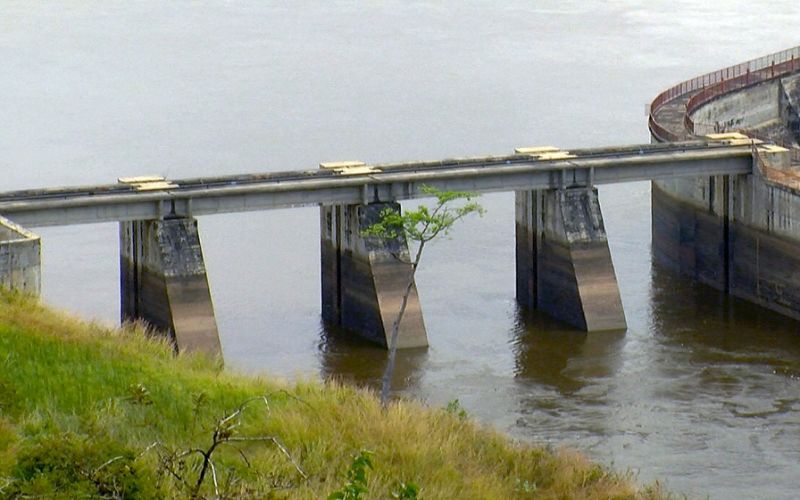 A portion of the current Inga dam, which has yet to achieve its full power-generating capacity. (Photo: Yahoo!)

The main critic of the project seems to be U.S.-based NGO International Rivers, which has devoted a section of its website to explaining the project, and has been using social media to raise awareness about the threats for a couple of years and who stands to benefit from the project. Their objections to the project fall into three main categories:

1. Thousands of people will be displaced. “Peter Bosshard, the NGO’s interim director, says those running the project are not concerned that 35,000 people may have to move in phase 1 and 25,000 people later, or that fish supplies from the river are likely to be greatly affected,” The Guardian reports.

2. No environmental impact studies have been completed. When questioned about the decision to move forward without a clear understanding of how the dam could harm the wildlife and natural resources near the Congo River basin, Kapandji told International Rivers, “It is a choice to make, people have no electricity. We set an objective – we have to produce energy. There are a lot of studies to carry out, at least 18, and we favour some over others based on priority.”

3. The first two Inga dam projects never reached their expected power output. As International Rivers states on their “Inga 3” web page: “In 1972 and 1982, the Mobutu government of the Democratic Republic of Congo, then called Zaire, built the Inga 1 and 2 hydropower schemes, with a total potential generation capacity of 2,132MW. Sadly, these two schemes have never operated to full capacity; in 2013 the dams were reported to have produced only 40 percent of their capacity.” A spokesperson for the NGO, Ange Asanzi went on to tell the Guardian that many of the same people who never received compensation for the effects of the first two Inga projects will be affected once again by the third phase.

So far, there has not been much response from Congolese citizens online. Late last year, one man wrote:

One month prior, journalist Christina Okello posted a crowdfunding campaign to support her investigation of Inga 3’s potential to solve Africa’s energy crisis.

On the whole, however, most social media awareness about the dam is coming from International Rivers and its leader, Bosshard. Looking more broadly, DevEx, an online media platform for the global development community, claims that “a chorus of African developers want Inga 3 to happen” so the U.S. government’s “Power Africa” initiative is trying to provide soft support in a way that would not “’tarnish’ the U.S. initiative’s brand.”