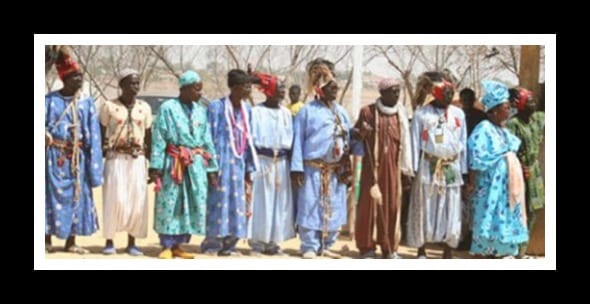 In the heart of the Sérère culture, the Xoy Ceremony of Divination and Prediction occurs every year in Fatick, where Senegalese President Macky Sall was born. The Xoy ceremony consists of a ritualistic procession that brings together the past, present, and future. The Xoy generally lasts days, where the initiated deliver their predictions to the society about meteorological, political, and economic phenomena. In the past, it was forbidden for the non-initiated to attend these ceremonies. Dating back to the 14th century, the general public was forbidden to attend the ceremony; only  the initiated had the right to participate in these sessions of divination or predictions.

SEE ALSO: Visiting Nigeria’s Slave Museum at Badagry & the Island of No Return

The ceremony is controlled by the saltigues of the spiritual great masters gathering the initiated saltigué, Traditionally, Sérères believed in a creative God called “Roog” or “Roog Sen,” which means omniscient and almighty God. The Sérères bless Roog directly but can also pass them through ancestors (pangols) that are symbolized by objects that are unique to each family: the foot of trees, rivers, the sea, a pestle (drumstick), etc. The prayers are then sent to the pangols, who are the intermediaries between the land of the living and the divine. This ensures sérères remain faithful to the ancestral spirituality and the soul of the sanctified ancestors. 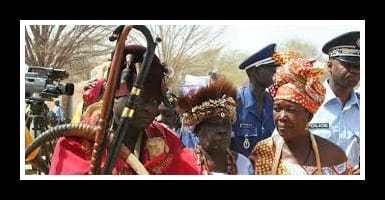 Saltigués are priests and sérères are priestesses who preside over the religious ceremonies and over the business affairs of the sérère community, such as the ceremony of Xoy, which is the major event for the sérère. The titles “saltigués” and “sereres” are generally inherited at birth paternally from old sérères families.

Men and women can be introduced in the secret order of saltigué. According to the religious Sérère doctrine, to become a spiritual elder (saltigué), it is necessary to be particularly introduced to the the mysteries of the universe and the invisible world, which is reserved to a few people. Nowadays, even though most of them were converted to Islam, saltigués continue their practices.

Saltigués used to serve as advisers on the weather to “sérères governments,” with saltigués informing the government whether it would rain enough to cover the season for agriculture. Their role was — and is always — to contribute to the prosperity of the country. As such, they were also in charge of predicting the future of kings as well as any natural or political disaster that could happen in the country.

Xoy is a very special religious ceremony in the Sine-Saloum region and a special event in the religious calendar of sérères, with thousands of people coming from all over the continent. Held mainly every first Saturday of June, it is the moment when 500 male and female saltigués, agents of knowledge for the ancestors, take part in the divination to predict the future in front of the community.

Impressive in their suits with accessories decorated by pieces of mirror, gri gri, and other diverse objects, they meet at the Experimental Center, where Fatick’s traditional medicine can be found, in conclave during the night. The next day, they return, marking the official ceremony.
The Saltigue parade to deliver their messages, and from time to time, they present challenges to the public.

For example, in years past, the saltigue predicted that a Fulani would become president of Senegal one day, and so it was with President Sall. Then last year, they predicted bloodshed during the local election of June 29th and announced that a journalist will be killed.

At the end, Saltigues’ recommendations are offered and then followed by consultation sessions and the sale of mystic products and traditional medicine.

This practice or science, which values the authentic knowledge of the ancestors, fell in to the public domain in the 14th century, when the royal dynasty gelwaar visionary has guest les Saltigués to express himself in the open living spaces, for the biggest property of the social group.

Watch a Xoy Ceremony for yourself here:

SEE ALSO: Is EFF Ready To Go to War for South Africa’s Liberation?