Ivory Coast and Manchester City’s Yaya Toure announced his retirement from international football on Tuesday, after 14 years of representing his country.

Toure, 33, played 113 times for the Ivory Coast, lifting the African Cup of Nations with the team in 2015. BBC Sport reports that the four-time African Footballer of the Year described his decision to quit international football as one of his hardest decisions, “Writing this note was probably the most difficult match of my life. After 14 years at the highest level, I’m sure this is the right time for me.

“The fact that I am 33 now, the intensity of training and the multitude of games are not the reasons why I am making this decision.

“I would like to say solemnly that I am stopping. It’s true that I had several titles at clubs, national cups, league trophies. With the Elephants, it was even more special. I learned to win for my country. That’s why I will always retain the pride in having achieved four African Golden Balls for the Ivory Coast. 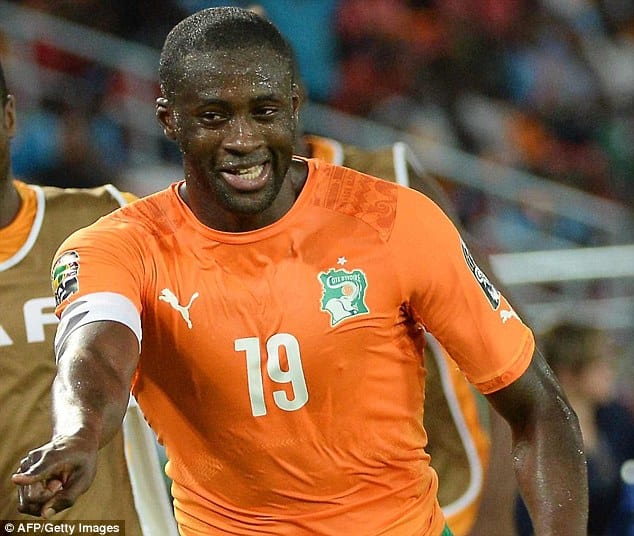 yaya toure was capped 133 times for his country winning the AFCON with the Elephants of Ivory Coast in 2015.
Photo Credit: Daily Mail

Toure’s announcement that he had quit international duty was closely followed by Manchester City’s announcement that it would no longer feature Toure until his agent Dimitri Seluk offered an apology for criticizing the coach’s decision to leave the midfielder’s name out of  the UEFA Champions League football squad list.

Manchester City Manager Pep Guardiola‘s decision to leave Toure’s name off of the club’s squad clearly infuriated Seluk who granted an interview to British tabloid the Mirror saying, “I hope that Pep has the balls to say he was wrong to humiliate a great player like Yaya Toure.”

Toure, who earns $300,000 per week, has played just once for Manchester City since he was left out of the club’s Champions League squad.

Toure and Guardiola worked together during their time in Barcelona, winning the Spanish league and the Champions League in 2009. The partnership, however, did not last much longer, though, since Toure was curiously sold off by Guardiola to City in 2010.

Speaking to newsmen on Tuesday, Guardiola insisted, “Seluk must apologize. If he doesn’t, he [Toure] won’t play. A manager has to make his job. If he has a problem, he should speak to people at the club.

“I cannot imagine when I was a player that my manager (agent) would go to the media and speak against [former Barcelona coach] Johan Cruyff and say about this and that.

“Maybe it is a new period and things are changing, but I am an old guy. In the old generation, the manager has to make his job and the player his job, trainer his job.

“If he has a problem, call the club, and they can talk. Until he speaks, Yaya is not going to play.”

Toure’s current contract with Manchester City expires in June 2017, but the two-time premier league winner is widely expected to leave the club in January during the winter transfer window, with offers coming from China and Italy for his services.