Patrick Mutukwa Shumba, who is based in the United States, was a Border Tribe warrior in the highest-grossing movie alongside actor Daniel Kaluuya who played W’Kabi.

Shumba was quick to apologize on Sunday in a statement issued by his publicist saying he “recognizes his errored decision” and “owns up to the immature behavior in his past”.

Shumba has resorted to Facebook to post videos and poems of apology to the people of Zambia over the video. He also asks that people refrain from sharing the video on social media so that children do not witness it.

Shumba spent the past month in Zambia with children and gave inspirational speeches to young people who have dreams of becoming like him. He was also welcomed by the government and regarded as a role model for the youth. 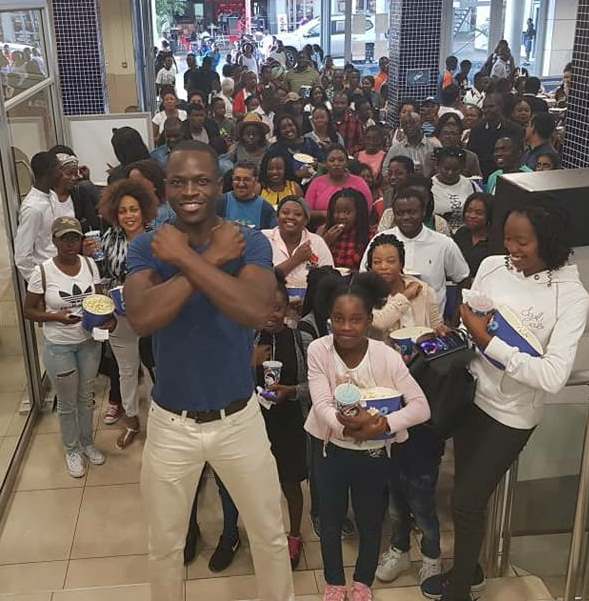 Zambia is intolerant to homosexuality like many other African countries and it is illegal to practice homosexuality in the country.

99 Things
Emptiness. It’s what fills my lungs when I inhale. My ribs constrict me, forcing my lungs to collapse. I’m still alive, but I’m dead on the inside. Pure darkness in my soul. 70 shades darker than dark black.

Silence. It’s what’s fills the air when I call for help. Not a word of encouragement. Deafening negative vibes echoing through space, magnified by hate and conditional love. Words, sharper than a chef’s knife, piercing through my ear canal. I play deaf, but I’m listening. God hears and knows my path.

Shame. It’s what running through my blood as I try to run away from the truth. The truth that I made a mistake. A mistake I can never fix, even if I tried. So, I hang my head low and pray it all comes to pass. Time stands still and it doesn’t pass fast enough. I’m emotionally constipated. Trapped inside the belly of a fish, I can’t run from my destiny.

Regret. It’s what’s left of what was once a heart full of beautiful songs. Feeling low. Listening to blues, but not for too long because there’s beauty in all this mess: lessons to be learned and self-loathing to get rid of. I did 99 things right, and one regrettable thing…and for that I will not crucify myself. I take comfort in knowing that a great multitude still love and embrace me in the good and worse.

An apology. It’s the only thing I have left to offer. No fancy words, no excuses. Apology to the people hurt by my past mistakes. I can promise you, I am far removed from that man. New path, new choices, new directions, renewed faith.

If that is Patrick Shumba, I am disappointed in whoever went out of their way to find that video. Given, publicity and fame of sorts is not without exposé but come on! Especially after how people were happy to belittle his role in Black Panther. It be your own people.

Finally, a movie where Patrick Shumba is clearly visible and y’all tripping.

I know we’re supposed to hate Patrick Shumba but ladies have you seen the way that waist is moving? ??

I was curious about Patrick Shumba’s video since twitter is so hot on it and now I regret watching it. I cannot UNSEE that. Ugh! ? #NeverAgain

From a bit part role in a black superhero movie, to a real life depiction of how Africa receives it from the back (presumably via China’s dick), this is the E! True Hollywood Story: Patrick Shumba

1st yes I laughed because that video was uncomfortable to watch.
2nd Patrick shumba is just trying to survive in this dog eat dog world.
3rd who was going through a gay pornsite in the first place.

I’ve just seen this Patrick Shumba thingy and it’s so funny cause the person who tried to bring him down has exposed themselves as probably being gay as well. Same WhatsApp group but you want to look superior? Foolish.

Anyhoo I don’t understand Patrick Shumba’s circumstances which led him to that so I won’t play Judge Judy, hope he bounces back from this setback ?

I just wanna say that I still support Patrick Shumba and am still behind him 100%…
As long as he doesn’t get behind me…
???#PatrickShumfwa pic.twitter.com/wkGFZ9LX1a