On May 7th, the Nigerian government announced that it had secured the release of 82 school girls abducted by Islamist terror group Boko Haram in 2014.

Eight months earlier, in October, the militants had released 21 school girls to the Nigerian government.

So far, a total of 103 girls have been released by the militants.

The girls were released as part of a prisoner exchange negotiated by the Swiss government, the Red Cross Society, and a few trusted private individuals.

One such trusted negotiator is Zannah Mustapha, a lawyer based in Maiduguri, Borno State, the epicenter of the Boko Haram insurgency.

Mustapha is the founder of the Future Prowess Islamic Foundation, a school he founded in 2007 to provide free Islamic-based education to orphans and the poor.

When the Boko Haram insurgency erupted in 2009, the school offered admission to the children of soldiers and government officials who had been killed by the militants as well as those of militants killed by the state.

Mustapha then reached out to the International Committee of the Red Cross (ICRC) to help provide the pupils with free meals.

He also encouraged parents to form an association that would reach out to other widows and convince them to send their children to his school.

The ICRC soon extended its humanitarian services to Mothers, providing them with free food and other items every month.

Following a visit in 2012 to the Future Prowess School by the Swiss envoy to Nigeria, arrangements were made for Mustapha to travel to Zurich and Geneva to receive formal training as a mediator. 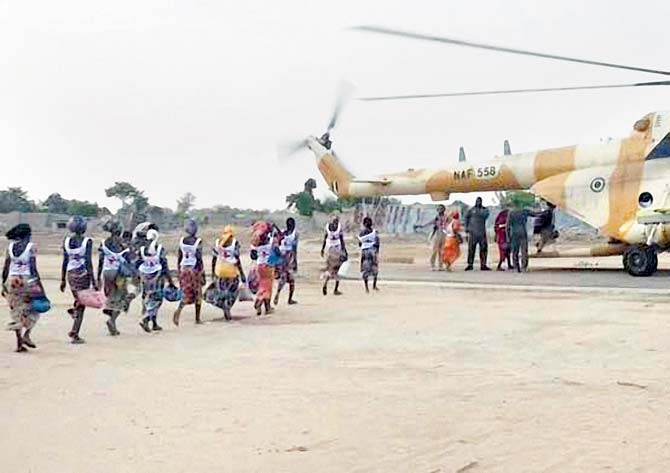 Some of the Chibok girls move towards a Nigerian army helicopter after their release on Saturday.
Photo credit: Saharareporters

“We were already trying to negotiate peace with Boko Haram before the Chibok girls were kidnapped,” Mr. Mustapha said, adding, “This was at a time when the wives of Boko Haram militants were being arrested and their houses demolished, so Boko Haram saw me and the ICRC as neutral parties.”

Previous attempts by the Nigerian authorities to negotiate with the militants to secure the release of the girls had failed as very little was known about the operations of Boko Haram and even less was known about the whereabouts of the abducted schoolgirls.

And so it was to Mustapha that the Nigerian government turned to help negotiate the release of the girls.

Mustapha said during his first round of negotiations with Boko Haram the group promised to release 20 of the Chibok girls but, as a sign of commitment to their relationship, the militants added an extra woman, whom Mustapha said was their gift to him, thus bringing the total number of girls released in October to 21.

For his work with the Chibok girls, Mustapha has been recognized with the 2016 Robert Burns Humanitarian Award, which is given to those who have “saved, improved, or enriched the lives of others or society as a whole, through self-sacrifice, selfless service, hands-on charitable or volunteer work, or other acts.”

He was also given the 2017 Aurora Prize Modern Day Hero Award for those whose “life and actions guarantee the safe existence of others.”

Mustapha describes his success at securing the release of the girls as the highest point in his life. “I felt that I have done something that is worth saying to the world that I have done this,” he said.