Mighty Warriors of Zimbabwe are the first team to qualify for the women’s Africa Cup of Nations after their impressive win of 3-2 against the Shepolopolo of Zambia in Lusaka (Zambia’s capital) on Sunday, 11 April.

Once again it was Zimbabwe’s Kudakwashe Bhasopo who stepped up to put her team in front with an impressive rebound tap in the 6th minute of the first half, cementing her 1-0 cracker in the first leg on Wednesday, 6 April.

It didn’t take Shepolopolo long to level the scores after Noria Sosala unleashed a strike that left Zimbabwe’s goalkeeper Chido Dzingirai disappointed. Mighty Warriors were bent on carrying the day as they regained the lead through the efforts of Samkeliso Zulu a few minutes to the halftime whistle.

Zambia leveled the score in the 60th minute through a penalty kick that was well taken by Misozi Zulu, but it was the Mighty Warriors who had the final say with an impressive grounder by Emmaculate Msipa in extra time.

The win comes as a second major honor for the Mighty Warriors following their historic qualification in October 2015, when they triumphed over Cameroon on away goals to become the first team to represent Zimbabwe at the Rio Olympic Games in Brazil, which is slated for August 2016. 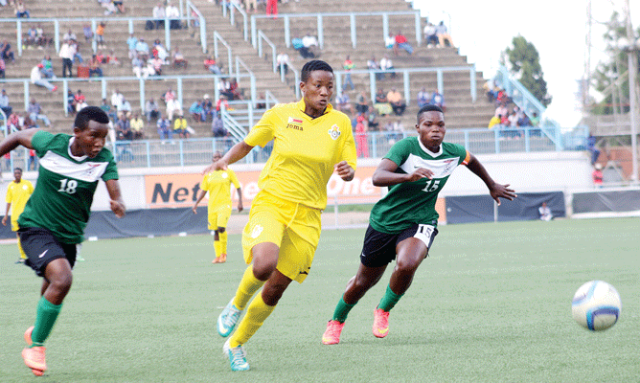 “I’m very happy with the result, especially that we have made it for the Olympics and now for the AWC. It was a 50-50 game but what matters is that we have won and qualified competition.”

Equatorial Guinea’s 2-1 win over Mali on Sunday also saw them secure a place in the Women’s AFCON finals. Egypt is the latest qualifier, having triumphed over Ivory Coast on a 2-2 goals aggregate after their clash in Yamoussoukro, Ivory Coast on Monday, 11 April, which ended 1-2 in favor of the hosts.