Dozens of people are dead after a church building collapsed in Uyo, the capital city of Akwa Ibom state, one of Nigeria’s oil rich regions. Local resident and photojournalist Ini Samuel told Reuters that more than 100 people were killed on Saturday after the steel roof on the main auditorium of Reigners Bible Ministry church caved in without warning.

According to State Police Spokeswoman Cordelia Nwawe however, 27 people were killed and 30 injured, while the National Emergency Management Agency released a statement stating that six people had been killed and 115 injured.

Akwa Ibom State Governor, Udom Emmanuel, was one of the worshippers in attendance who managed to escape the rubble without injury. An eyewitness, Otobong Asukwo, told Premium Times that the governor, like himself, had divine providence to thank for his survival.

“The collapse happened from the middle of the church roof. I noticed that the support for the pillars in the middle were removed, perhaps to allow for more space for people to sit,” he explained.

“The governor and his people were inside the church, but they escaped because they were sitting in the front and the roof collapsed in the middle on top of many people. I saw one of the aides of the governor badly injured and was rushed to the hospital. The governor however, appears [to have escaped] unhurt.”

Other observers described the scene of the building collapse as a heartbreaking human tragedy.

Eyewitness Uduak Effiong told the News Agency of Nigeria that a female victim’s bowels were ripped open by  falling steel girders, while another eyewitness told  CNN that he saw “survivors screaming, [while] people were running up and down. People were killed, some survivors’ legs were badly cut.” 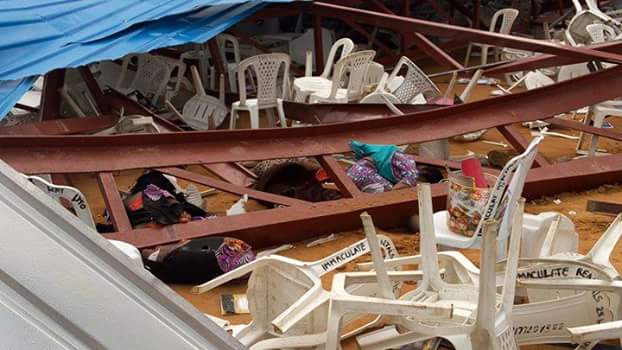 The remains of a church which collapsed during a Saturday service in the southern city of Uyo in Akwa Ibom state, Nigeria. Photo Credit: Punch Newspapers

Authorities are unwilling to place an exact figure on the death toll, telling reporters that it is difficult to ascertain since the situation is still developing.

“The injured are still being taken to the hospital and some people who may appear dead may actually have just lost consciousness,” Nwanwe said.

“We have to wait for confirmation of status of all victims from the medical personnel before we can give any figure.”

It is still unclear what caused the church building to collapse, but the local media is suggesting that substandard construction methods and poor enforcement of building codes are to blame.

Emmanuel has promised to institute a panel of inquiry  in order “to ascertain the immediate and remote causes leading to the collapse of the building.” The government has also declared two days of mourning on Monday and Tuesday to honor the victims.