Tributes are pouring in for popular Nigerian radio broadcaster Tosyn Bucknor who passed away at the age of 37 due to complications from sickle cell.

Media reports said Bucknor was found unconscious by her husband, a French national, Aurelien Boyer when he arrived at home from work on Monday night.

The deceased’s sister, Funke Bucknor Obruthe, who confirmed the unfortunate news on her Instagram page said: “My darling sister and besto Tosyn passed away last night due to complications from sickle cell.”

Hmmmmm…My heart is heavy…but in all things we give thanks to God. My darling sister and besto Tosyn passed away last night due to complications from sickle cell. Love you …….

The media personality, popularly known as “Voice of Lagos” and a graduate of law from the University of Lagos, was born with sickle cell anaemia, a health condition she has often been vocal about. 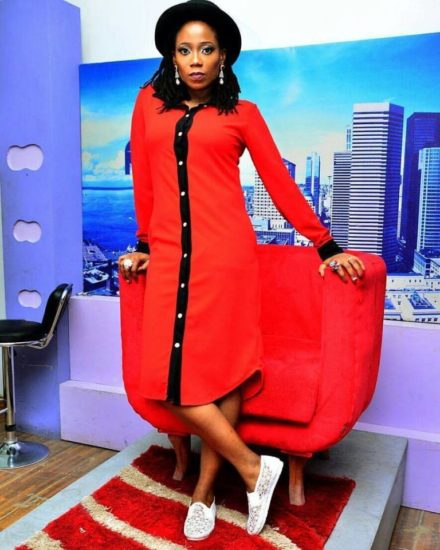 Bucknor has, during her lifetime, worked with two local radio stations – Top Radio and Inspiration FM, where she attracted a large following.

Before her demise, she founded the ‘These Genes Project’ in 2007 to raise awareness about sickle cell.

Scores of Nigerians, including celebrities and politicians, have taken to social media to pay their tribute:

I won’t be where I am but for Tosyn Bucknor. I’m eternally grateful for the time she was with us.

Praying for her family to find comfort this dark time ? pic.twitter.com/WpqwMi7K8N

I have just received the sad news of the passage of Tosyn Bucknor (Area Mama) due to complications from Sickle cell.

As a healthcare professional, I am well aware of the challenges of people living with sickle cell.

RIP Tosyn Bucknor. You’ll be remembered forever. Thank you for the pleasant memories you left behind.” pic.twitter.com/bfvQ6lPtM0

Tosyn Bucknor was also an artiste ‘Contradiction’.. this is one of her songs, RIP Tosin pic.twitter.com/TP5DkLnVk2

My sincere condolence to the family, friends and colleagues of the late Tosyn Bucknor. She was a talented personality, full of life and vigour. May her soul rest in peace.

Tosyn Bucknor one of the most genuine souls on radio. Life sucks man, may she Rest In Peace. She was a huge supporter of everything I did from the jump. May God be with her family!

Nigerians! Please! We can’t be allowing Sickle Cell take people so soon! We need to make the effort to know about it and give people access to the help and support they need!
Can’t stress this enough

Sickle cell disease (SCD), or sickle cell anaemia, is a major genetic disease that affects most countries in the African Region.

The disease causes the normal round shape of red blood cells to become like crescent moons. Round red blood cells can move easily through the blood vessels but sickled shaped cells interconnect and can result in blood clots, according to the WHO.

These blood clots can cause extreme pain in the chest, back, hands and feet, and eventually damage the bones, muscles and organs. Victims of sickle cell often feel tired, weak and look pale and the whites of the eyes and skin do sometimes develop a yellow tint.

Other environmental triggers of the disease include cold temperatures, dehydration, excessive amounts of exercise and tobacco smoke.

In Africa, the majority of children with the most severe form of the disease die before the age of five, usually from an infection or severe blood loss. In countries such as Cameroon, Republic of Congo, Gabon, Ghana and Nigeria the prevalence is between 20 and 30 per cent while in some parts of Uganda it is as high as 45 per cent, statistics from WHO said.