The line from Abraham Lincoln‘s Gettysburg address, where he described democracy as “the government of the people, by the people, and for the people” is the most remembered part of his November 1863 speech.

Lincoln’s definition of democracy has become the gold standard for measuring democracies around the world today. Today, democracy is America’s biggest export — after arms and Hollywood — but democracy is not an American idea. Instead, it was invented by the Greeks centuries ago.

For America (and most of the West), democracy is not just a wonderful way to govern themselves, it has become the panacea, a silver bullet, a cure-all to all of mankind’s problems.

America swears by it and the majority of Western Europe affirms it. And the proof of it, they claim, is in how well their societies function. America, in particular, is so impressed by this Greek form of governance that they have chosen to become its biggest promoter.

In fact, by the end of WWII, America began to vigorously promote this product from country to country around war ravaged Europe and Asia.

In the middle of the 20th century, as several African countries struggled for independence, America jumped right in — with most of the West in tow — to continue its business of hawking democracy to all countries and nations of the earth.

Now it was Africa’s turn to buy in to democracy, and it bought into it with its numbers. Most of the newly independent African nations didn’t even need a lot of convincing to see that democracy was a great way to govern themselves.

Indeed, many indigenous tribes of Africa (south of the Sahara) have historically rejected the idea of a big overreaching government, which all too easily fosters tyrants, preferring instead to come together when necessary as a loose federating unit.

The business model of the “American democracy corporation” was a simple one: every potential client either had to “buy it” or “buy it” because democracy is good for everyone, and it proved to be a very effective marketing strategy with many nations jumping in.

But that was hardly enough.

America was also going to give each and every country specific directions on how they wanted them to use this product.

It was probably in Africa that America first set out to redefine democracy. It decided to loosen the concept of democracy a little at the edges, and thus, it became a fluid concept that can be deeply confusing.

In fact, Africa has struggled from the beginning to understand what exactly is America’s definition of democracy. 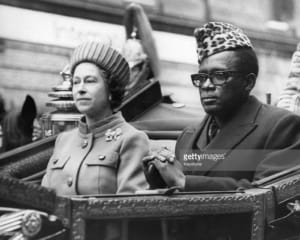 Mobutu was pampered by the West. Here he is being received by the Queen when he visited the U.K.  Photo: Getty Images

In 1960, Congo was a newly independent democratic state headed by Prime Minister Patrice Lumumba, when America became actively involved in the plot to violently depose him and then look away as he was murdered in cold blood.

They then went on to invest overwhelmingly in the installation of Mobutu Sese Seko, a brutal rabid scoundrel whose infamy exceeded human proportions.

Lumumba had come to power through the ballot box, voted for and by the people of the Congo in a democratic election, but America hardly thought he was democratic enough.

They believed that Lumumba had some shortcomings: For one, he was too charismatic, meaning he appealed to a broad cross section of the Congolese people. In addition, Lumumba was suspected of harboring communist sentiments.

So America cared for the Congo’s future by gruesomely kicking Lumumba out of power and replacing him with the most tyrannical of military tyrants.

In the late-1970s and early 1980s, America concocted a solution to the problem of Libya’s Muammar Gaddafi who was the new problem child of the international community and causing the West a nasty headache.

Libya is bordered to the south by the little-known African nation of Chad. In Chad, Hissene Habre seized power in 1982, after his soldiers had defeated forces loyal to former President Felix Malloum.

In Habre, the West had found a possible solution to its Gaddafi problem. Habre, in his time, made no pretensions about being a democrat but that did not stop America and France from propping him up as Chad’s ruler — even standing by him as one of his biggest allies throughout the eight years of horror that he visited on his people.

And America had its reasons.

The CIA was set to use Chad as a base to launch an anti-Gaddafi force that would topple his government. So they turned a blind eye to Habre’s reign of terror and torture and dismal human rights record even as they trained some members of his dreaded Documentation and Security Directorate agents.

In the middle of America’s involvement with Chad, however, it continued to preach democracy elsewhere across Africa. 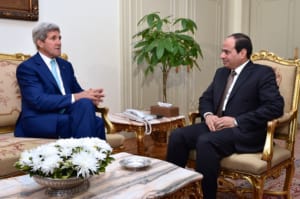 More recently in Egypt, America has again struggled to define its position on democracy in Africa. In the wake of the 2011 Arab Spring that chased Hosni Mubarak out of power.

One year later in June 2013, Morsi’s government was unraveling fast as a result of legislation he pushed to grant himself unlimited power.

He was unseated in a military coup in July the same year. Many observers around the world and liberal Egyptians conceded that Morsi had indeed bitten off more than he could chew.

Morsi was replaced by the leader of the coup and former head of the Egyptian army Abdel Fattah al-Sisi, the ex-general, who wasted no time in showing Egyptians who was in charge. All protests and appearances of dissidence have since then been met with a heavy handed response from military authorities.

Today, Egypt has slid back into the sort of totalitarian repression that characterised former President Mubarak’s 30 years in power. Egypt is clearly under a dictatorship today, yet America has continued to back al-Sisi all the way. There have been no wide-ranging sanctions on the al-Sisi government and no suspension of military aid. America has even refused to call Morsi’s ouster the coup that it is.

Al-Sisi appears capable of providing much-needed stability in Egypt and preventing a collapse of the Egyptian state. He has also authorized extensive military operations around the Sinai Peninsula against Islamist militias — all of which further America’s Middle East policy.

Once again, another tyrant meets the minimum requirements and America promptly redefines democracy yet again.

In Africa, many have eventually come to accept that “democracy is the government of a certain African nation, by whoever it maybe, for America.”

For America, that’s the deal breaker right there at the end of the phrase and the only part of the definition that matters. Indeed, any form of government can be called a “democracy” as long as America’s interests are duly taken care of.