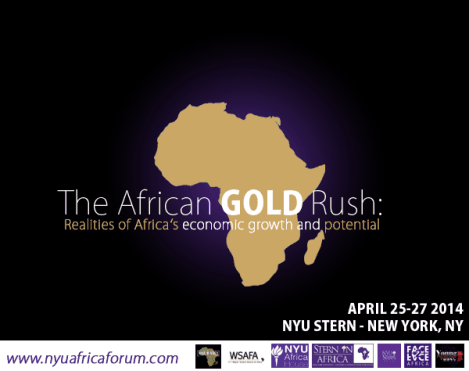 New York, NY, March 11, 2014: On April 26, 2014, join the NYU Stern Africa Business Club (“Stern in Africa”), NYU Africa House and Wagner Student Association for Africa for the Annual Africa Economic Forum (AEF).  This year’s speakers and attendees will dialogue on the theme of “The African Gold Rush: Realities of Africa’s Economic Growth and Potential.” The aim on the 2014 forum is present a balanced depiction of the current economic state in many African countries, while highlighting promising transformation across Africa.  Discussions will include a look at the challenges that lay ahead of Africa’s path to realizing its full potential as the world’s final investment frontier.

“We are pleased to provide a platform for Africa’s top business thinkers, entrepreneurs, and innovators to dialogue and share insights on successfully maneuvering through these challenges, and identify best practices and opportunities for sustainable and inclusive growth in Africa”, said the organizers.

This year’s event is hosted in partnership with Face2Face Africa and Young African MBAs who will provide networking opportunities for conference attendees during the weekend of April 25-27, 2014.

About Stern in Africa (SiA):

SiA is a student club at NYU’s Stern Business School. The club organizes professional, educational, and social events that enable thought leaders, industry practitioners, and MBA students to promote investments in Africa and highlight the growing importance of the continent in the global economy